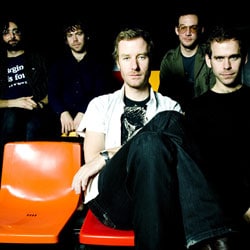 It is rare to find yourself in tears at a gig because it is so good. At bad gigs it is a given, but to be moved is rare for hacks hardened by years watching good, bad and very ugly bands pouring their souls out to audiences of varying degrees of indifference.

The National managed to do it to me at London’s 100 Club on the penultimate night of their gruelling 27-date European Tour.

The band has drawn comparisons with Nick Cave, Tindersticks and The Smiths, and it is easy to see why. Even in this small venue Berninger’s voice sounded like the crack of doom, booming out to a crowd mesmerised by a man with the troubled presence of Kurt Cobain despite looking like a distraught Rhys Ifans.

The contrast of Dessner’s playful guitar riffs make Marr-Morrissey comparisons hard to resist. But whereas Steven Patrick’s poetry has the ironic self-regard of teen-dom, all be it delivered tongue rammed firmly in cheek, Berninger’s pain is real, articulating the angst of life, love and loss in a grown up world. Bittersweet has never been so hard to swallow or so irresistible to watch.

The set kicked off quietly with the low-key intro to All The Wine, a controlled, angry stab at West Coast narcissism. Instantly its heady mix of melody and darkness hooked us. This was followed by a set that mixed tracks from the critically acclaimed recent release Alligator, Cherry Tree EP and debut album Sad Songs for Dirty Lovers.

As Bryan Devondorf’s drums heralded Lit Up, Berninger called out to the roadies: “If you want to turn down the lights its okay.” Not that it was bright, but darkness suited the brooding sound of the singer, who paced the stage like a great black question mark. He seemed most troubled during the sweetly harmonic Looking For Astronauts, calling to mind memories of REM‘s early days and an uneasy Michael Stipe.

After two months on the road, crisscrossing the UK, Germany and France, the band looked tired and tonight they concentrated on their fine playing to let Berninger absorb the light – or darkness – which was as it should be. His exhaustion stripped away any protective layers from his performance, revealing emotion in its truest, most raw state, and the songs were the better for it.

And the song that made me cry? About Today from the Cherry Tree EP, a final encore for a very appreciative audience. Drummer Devondorf’s intro was the murmur of a heartbeat, accompanied by expansive guitar and violin. Berninger’s voice resonated with all the regret of a broken, penitent heart. It took me back to the first time I heard Lou Reed‘s Perfect Day, and a tear stole its way down my cheek. It doesn’t get better than that.