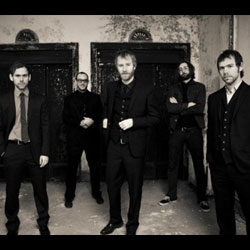 Today is not really a good day for a London gig. The tube strike has done nothing but frustrate commuters and the bitter weather that is at the very least freezing is enough to make the blood turn cold if you stood outside for long enough. What you’d need on a day like this is a cheery and happy band to make you forget about the arctic conditions and travel nightmares. The National are not one of those bands. However, what they deliver in front of a packed Brixton Academy – this is the first of a three night residency – is easily one of the gigs of the year.

There are several reasons why this ranks amongst the year’s most triumphant live music experiences. Matt Berninger, for starters, is a tour de force of a frontman; but his talents are not immediately displayed as things kick off; instead he’s all pensive and composed. But 20 minutes later he is howling into his microphone with unbelievable passion and towards the end he’s spending his time walking through the stalls from one side to the other. It’s not often that you see a singer who, several months into a tour, can still convey a raw emotion in every song they sing.

The band as a whole are on top form and you kind of wish this went on all night long (and in these conditions no one wants to go back outside). Newer cuts from High Violet in particular fare magnificently well; Sorrow is beautifully melancholic and England gets one of the best receptions of the night, not least for patriotic reasons. If that wasn’t enough, the power of Terrible Love is given even more momentum with guest appearances from Nico Muhly and Sufjan Stevens, both of whom helped The National in the making of High Violet. It is uplifting despite the relative bleak lyrics.

Whilst older tracks do get an airing – Mistaken For Strangers, Mr November and Abel in particular being the best of the bunch – it’s the newer songs that shine the brightest. Bloodbuzz Ohio is mesmerising to watch, steadily progressing for its five and a half minute duration. The real moment of power comes right at the end when the band go unplugged with an acoustic rendition of Vanderlyle Crybaby Geeks. It’s stunning and surely one of the most perfect ways to end any concert.

And yet, despite the intensity, the passion, the power and the seriousness of their music they are also probably one of the funniest bands in terms of on-stage banter. The constant tongue-in-cheek ribbing into each other made them extremely likeable.

In a week where current certified Biggest Band In The World Arcade Fire are also in town at the O2 Arena, The National could have just stolen their thunder. Some people may not have had an easy trip to Brixton today, but their perseverance was rewarded in spades with an evening where everything went right.