by Rob Watson
published: 6 May 2010 in Live Music Reviews
Tweet 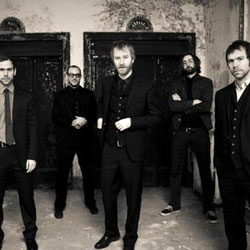 There’s something fetchingly grandiose about Brooklyn rockers The National‘s new record High Violet – the band seemingly having set aside their quieter, more complex work for more immediate, stadium-sized angst. So it’s heart warming that, having slogged around shows at places like London’s tiny 100 Club in recent years, on releasing their most commercial record yet they can sell out the cavernous Royal Albert Hall in just two minutes.

The venue is a fittingly grand place for what feels like a culmination of sorts for the group, whose breakthrough record – if one can call it that – came seven years into their career. The band inspire rabid devotion amongst critics and bloggers but, up until now, have never grabbed the public’s attention in the way that like-minded groups like, say, Editors or The xx have done.

Tonight, then, glory is there for the taking. In front of an (adopted) home crowd, with a universally acclaimed new record to promote, this has all the hallmarks of the beginning of a victory lap, to take in some huge summer festival shows (including the now famous ‘Elbow‘ slot at Glastonbury on the Other Stage) and an extensive American tour later this year.

Yet it doesn’t start well. Perhaps it’s the soundman being completely unprepared for the intricacies of a concert in something roughly the size of an oil tanker, but the first couple of songs of one of the biggest shows of the band’s career are hugely disappointing. Opener Mistaken For Strangers is chugging, muddied and lacking in any subtlety – a menacing, brooding rocker on record reduced to something a pub band would be annoyed by. The first of the new songs, Anyone’s Ghost is better, but still lacking in the oomph that makes it one of High Violet’s standouts. The sound washes over the seated auditorium and echoes off the walls. This isn’t going to plan.

Then, two things happen. First, the soundman sorts himself out and the guitars, piano and horn section suddenly click into place as drummer Bryce Dressner begins pounding out the intro to new single Bloodbuzz Ohio. Then, in an I-was-there moment, treacle-voiced lead singer Mat Berninger steps into the crowd and gently pulls one of the members of the audience to his feet. Like a huge Mexican wave, the 5,000-strong crowd follows suit, and for the next hour and a half are treated to the sight of a band making a giant leap into the big time.

National gigs have long been synonymous with emotional overload – songs often end in overpowering walls of noise, Berninger traditionally drinks a bottle of wine and throws himself into the audience – and the power of these concerts often reduce hardened musos (even ones from this website) to tears. All of this is present tonight, but there is something else; a new air of confidence that reverberates out much further than West London. Tonight, Matthew, the band have become proper rock stars in the Coldplay mode. And bloody hell, do they suit it.

Much of this is down to the new songs, nine of which they play tonight. While they still need to be broken in (the meandering Little Faith is as confused tonight as on record) most are big enough to fill a venue three times this size. Afraid Of Everyone, with its brooding guitar licks and its call-and-response outro, feels immense, while the slow burning England rises and rises into a euphoric chant that throbs and bursts around the auditorium. Set highlight Vanderlyle Crybaby Geeks feels like the moment the band tackle, and overcome, the final hurdle – the end of concert tearjerker. Beautiful on record, perfect here, the piano-led nursery rhyme is the band’s The Scientist or Fix You – just eking out more intelligence and emotion in a single rhyming couplet than either of those songs could muster.

The older songs are, of course, rapturously received. The piano-led Fake Empire, adopted by the Obama election campaign, is elegiac and poised, All The Wine is triumphant (with Berninger’s originally sarcastic lyrics “So tall I take over the street/ I’m a festival, I’m a parade” more and more prescient) and Mr November, where Berninger takes his traditional walkabout in the crowd, this time ending up in a box at the back of the auditorium, barnstorming and punchy.

Perhaps the best indication of how far they’ve come is on penultimate song Terrible Love, which has everything – an impassioned chorus, screamed by the singer until veins stand out on his forehead, and a second half that builds and builds until it becomes almost unbearable. After 11 years of trying, The National have become the band we always hoped they would be. Soon, venues like this will be too small to hold them.