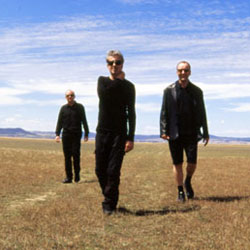 A live performance by the renowned Australian improv trio The Necks is indeed a rare and wonderful experience. Performing as part of the Blaze festival in the cosy Barbican Theatre, they brought with them professionalism and passion in equal measure. Dressed only in matching black and sporting the demeanour of friendly university lecturers, they silently take their seats on the simply dressed stage and a hush descends.

Pianist Chris Abrahams is first off the bat creating a deceptively simple discordant piano melody for a minute or two, which craftily works its way into the collective consciousness. Add to this double bassist Lloyd Swanton’s staccato pulsings and finally drummer Tony Buck’s subtle percussive backbone, and from nowhere an unabashed symphony is in full effect.

After what seems like 15 minutes or so of intricate Abrahams-led simplicity, the hall seems to shake and tremble with the awesome power they’ve been generating. There are no ‘bum’ notes, awkward riffs or off tempo segments. After 20+ years of live shows and numerous releases, this avant garde trio have tapped into each others’ individual nuances and intuitions, forming a hive mind of utter intensity and fluid musical bliss.

The first track is reminiscent of Michael Nyman‘s haunting soundtrack to The Piano with its vaguely aquatic melancholia and detached sinking coda. It dances around the brain bringing to mind the homemade craziness of Harry Partch and Moondog whilst also conjuring up the controlled arcs of Steve Reichand Terry Riley. Restless and nervy, it glides and drops with furious aplomb then finishes all too abruptly, leaving a resonant hum in the air.

After a small interval, the three return and the ritual begins again, only this time the senses are heightened with greater immediacy. A tacky jazz intro is quickly dispensed with in favour of a pounding metronomic whirlwind. The crowd seems to be in thrall and at times in tatters as rhythms fall in and out of focus. The ringleader for this number seems to be Buck who tinkles and bashes his various cowbells, tambourines and cymbals, bringing to mind the bombastic pomp and circumstance of post-rockers Godspeed You! Black Emperor.

In reviews, The Necks have often been lazily lumped in with that particular style of music. The truth is that they are so much more. They are a psychedelic act. Or Krautrock at a push. They wouldn’t go amiss at the UFO club or the Whisky a Go Go. This music is unashamedly druggy and hypnotic in its tone and delivery, despite the apparent straightness of the musicians. It clouds the brain and consumes the concentration of all who witness it, creating waves of euphoria or panic, if not both at the same time.