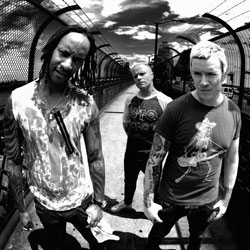 The Prodigy’s latest album Invaders Must Die has split the critics down the middle.

On the one side there are those hailing the Prodigy’s return to form and the explosive raw energy that they made their name with, while on the other there are those snootily looking down their noses and dismissing it as a regressive return to the trio’s ravey sound of yore.

Whatever the hacks say, the public seem to have taken the Essex trio back to their hearts, with the album hitting Number 1 and lingering around the top 10 for the past two months.

Once Dizzee Rascal has plied the enthusiastic crowd with his hard-hitting grime set and fellow support act Kissy Sell Out has unleashed a big room dance set, the curtain shunts forward and the lights come up for Liam, Keith and Maxim to break straight into World’s On Fire.

Having hit the ground running they run excitedly through tracks both new and old at a breathtaking pace, airing Their Law, Voodoo People and Firestarter alongside the fantastically manic Warrior’s Dance, current single Omen, and stomping new track, Comanche. It’s like one long adrenaline rush. One complaint could be that there really is no let up, which could prove exhausting, but in reality the onslaught is thrilling throughout.

Liam Howlett has always excelled at mixing up his own tunes and contorting them into completely new shapes, a talent he displays on several occasions tonight as perennial favourites Breathe and Poison are extended and Jericho receives a complete revamp. Keith and Maxim work off each other’s energy, geeing each other up and shouting in each other’s faces before turning to the crowd to do the same. A sea of arms then shoots heavenward on demand.

The crowd bay for an encore and the Braintree boys duly oblige, reprising Omen then leading into Invaders Must Die and Take Me To The Hospital, with its organ-pummelling bass accompanied by the continuing, retina-frying light show.

The finale comes in the form of Out Of Space which sees the whole audience in their thousands providing vocals. Whether anyone could have ever envisaged the original rave ethic spawning a mass stadium singalong 20 years down the line is doubtful, and it’s certain that there are probably some white gloved cronies out there who begrudge what happened to ‘their’ scene’, but all of that is irrelevant when there’s this much fun to be had.

Liam Howlett has repeated throughout the band’s 18-year career that without the buzz of playing live, The Prodigy would not exist. Indeed, it’s exactly that thrill of performing that pulled the band back together into the recording studio to produce an album that demands to be listened to loud and live. Tonight proved that nearly two decades after breaking out of the underground, The Prodigy are still relevant, have rediscovered their creative mojo and, above all, are still enjoying every second of it. An incendiary performance that demonstrated how live dance music should be brought to the stage.