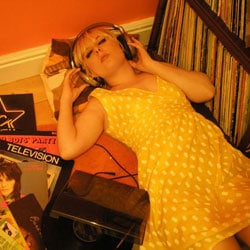 So the soundtrack to American teen pregnancy move Juno is conquering the American charts, and, all of a sudden, people are curious. What the hell is “Twee”, and for that matter, what the hell is “indiepop”?

Well, if you were here in Cardiff tonight you’d get a pretty good feel of what it’s all about. Clwb Ifor Bach is a hive of colourful activity, the music happy and melodic, and there’s not an ego in sight.

The UK indiepop scene has existed in the shadow the more popular mainstream indie and indie rock scenes since way back when, a reaction to all things commercial and prosaic, Belle and Sebastian being its most famous recent purveyors. All kinds of terms have grown out of the term “indiepop”, and I’d take “UnPopular” as the best one, perfectly explaining as it does what insiders call “genuine Pop” and it’s modern status as opposed to what is now actually popular… Pop is now a reaction to its inevitable offspring of commerce and ambition, and tonight two of Cardiff’s best indiepop purveyors come together with a treat from Derbyshire to make us forget the mathematics.

The Deirdres are a seven-piece from Derbyshire who recently made a name by playing the Indietracks “Christmas Twee” festival (a celebration of all things indiepop and Twee held on a steam train museum in the Ripley countryside), and they jump on stage like a whirlwind. It’s happy, snappy, so much fun, quintessentially modern Pop, and I, for one, could watch it all night. Two floppy-hatted teens stand hunched over a keyboard like they’re learning each other how to play it; another keyboardist is far side, wrenching further unlikely melodies, alternately terrified and happy by the sounds that are coming out, a girl plays guitar in the centre like it’s all she ever wanted to do, and the singing and shouting is spread amongst the group, humbly harmonious and screamingly good fun.

The Deirdres are actually one of modern indiepop’s more original-sounding bands, similar to Bearsuit in the way they shoot out lo-fi melodies that seem utterly spontaneous. There’s a bit of Talulah Gosh there too, cute-as-pie melodies fighting for life in the teaming whirl of glockenspiel, flute, tambourine, guitars and handclaps, but more than anything they really are the embodiment of the disillusioned kid who’s found home and community in music, in Pop (or UnPopular) music. Lucas Moodyson (Swedish Pop director who specialises in such young outsider stories) would look on and smile, and tonight The Deirdres are so good it’s poignant.

Next act Sweet Baboo (aka solo artist Stephen Black) is probably even harder to define than The Deirdres. The venue recovers for a while before he comes on with his one-man-show and begins singing like a young indie gospel man. Black for the most part sits crouched over his guitar, wryly cajoling the audience and playing blues and country numbers with a quirky, humorous twist. The humour is sometimes sick, sometimes affectionate, and there’s a couple of moments when it all really clicks for him, like when he ends a song with an apology for the fact it hasn’t got an ending. It’s a moment of, well.., brilliant Twee-pop ingenuity, but really, I could be forced to create another genre for this. Is Sweet Baboo Country Gospel Twee?

The School‘s Liz Hunt has been the keyboardist in Cardiff indiepop heroes The Loves since I remember, but now she’s hitting on her own kind of success. The School have recently been signed to merited indie (Pop) label Elefant, who’ve released records by a fleet of higher-end bands like Camera Obscura, Trembling Blue Stars and The Television Personalities in the past, and are back at home after a successful tour of that other indiepop hotbed Sweden.

The local crowd will them on, and these songs are getting better each time I hear them. The School specialise in the literal kind of indiepop sound of Camera Obscura and The Beach Boys, modern indie with a healthy smattering of Motown. The melodies fly out of the band with a shy kind of grace, Liz orchestrating from the front with her voice of sweet heartbreak and wonder. It’s like the missing Pipette fronting Camera Obscura. Violin and glockenspiel subtly soar in the background, the melodies wind and unwrap in sultry style, and as Valentine shimmers out with teary romance, I just have to pinch myself to check I’m alive.

The world is the oyster of bands who can make indiepop as well as this, but it’s the nature of Pop never to define happiness in terms of success. The modern world is far too nasty to ever embrace it in anything other than a superficial way, but it’ll go on regardless. At its best indiepop is poetry in motion, and tonight we’ve had an absolute treat.