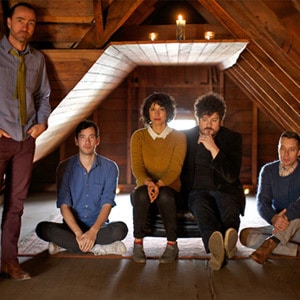 A couple of shows by influential indie rock band The Shins, led by sole original member James Mercer, in support of long-awaited forth album Port Of Morrow should stake a claim this week to being the hottest tickets in town. This is a gig that some have wanted years for and even Matt Berry, television funnyman, is in attendance on the second night. The atmosphere inside the Forum is buzzing and the stalls are packed – tonight is sold out, as was the previous night (something that the usually-reserved Mercer seems visibly happy about when he mentions it after the first few songs).

The evening is not mind-blowing, yet it is still more than enjoyable. They drop one of their big hits early on with Caring Is Creepy, which invokes a unified sing-along throughout the venue. Mercer is joined by a brand new band; two guitarists, a bassist and a keyboard player form The Shins’ live formation and they do a grand job of keeping faithful to his compositions.

The non-flashy nature of the evening is instantly apparent; they use only a few lights and a backdrop with their latest album artwork is as showy as they’re willing to be. This isn’t a problem but it does bring their music much to the forefront and you realise that the set could do with a bit more range. Simple Song and Phantom Limb are both infectiously crafted and the genuinely joyful It’s Only Life (which automatically sends couples into one another’s arms in perfect synchronisation) are satisfying enough, but the lack of any real change in dynamics save for one or two acoustic-led moments is the only thing that brings down the evening.

That said, they also have moments when they can really let loose and rock out. The Rifle’s Sprial delights with its rattling, up-tempo rhythm whilst Sleeping Lessons builds from its soft and subdued beginnings to burst into life into a spirited and lively second half. One By One All Day, which ends the gig, sees the band move into psychedelic wig-out territory towards its conclusion.

An encore follows, after what feels like an eternity passes, and a solo acoustic version of Young Pilgrims by Mercer is rapturously received. Before they carry on, the whole band takes a shot of liquidy substance containing cinnamon, tequila and orange. It sounds like both an intriguing and horrible cocktail but the fact that they’re all downing it in unison might be a good way of illustrating that this version of The Shins is a rock-solid one that looks likely to stick around for a while yet.