by Neil Dowden
published: 31 May 2013 in Live Music Reviews
Tweet 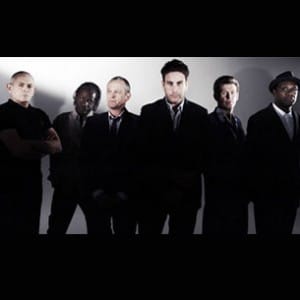 The rude boys and girls were out in force to welcome The Specials back to Brixton at the end of their month-long tour of Britain. The 2 Tone, punk-influenced ska revivalists may have their been in their youthful prime more than 30 years ago, but since re-forming in 2009 the band has proved that they still know how to put on a good show.

They seem to have settled for performing their original songs to adoring fans rather than producing any new material, but the real strength of their two studio albums was their spontaneous, live appeal anyway. The Specials have always been consummate entertainers.

Unfortunately, main songwriter/keyboardist Jerry Dammers remains out of the loop, with his dynamic Hammond organ sound sorely missed, and sadly toaster Neville Staple has recently had to drop out due to ill health so his lively stage antics are also lacking. This puts more weight on the surviving five members, with the backing of extra musicians including horn and string players. But even if some of the anarchic energy and edgy humour has gone, The Specials don’t disappoint as they get the crowd skanking and singing along.

Their 90-minute set features almost all of the back catalogue, with most of the best-loved songs coming from their first album. Kicking off with the football-terrace-like chants of Concrete Jungle, the band give a good account of songs such as the Prince Buster number Gangsters, the angrily anti-establishment Rat Race, the irresistibly lilting A Message To You Rudy and the funny but poignant Too Much Too Young. There’s also a spookily atmospheric version of Ghost Town, a classic expression of urban decay and youth disaffection that captured the spirit around the time of the 1981 riots, which exploded close to the Brixton Academy of course. Much of the pointed social commentary in the songs’ lyrics still rings true today.

The first encore, a cover of Bob Dylan’s protest song Maggie’s Farm, is presumably a reference to the lately departed and not much lamented Margaret Thatcher, but it doesn’t really work as a reggae song. The mood relaxes with Enjoy Yourself (It’s Later Than You Think) and becomes positively mellow in the closing Skatalites song You’re Wondering Now, with an extended chorus as the crowd join in not wanting the show to end.

Fronted by lead singer Terry Hall and second vocalist/rhythm guitarist Lynval Golding, the black-suit-clad band look and sound pretty sharp, even if there is less movement on stage than in the past. However, there is plenty of movement among the audience, a mixed bunch but predominantly white, middle-aged males wearing mod/skinhead-style gear, including Fred Perry shirts, pork-pie hats and braces. In a reminder of The Specials’ Rock Against Racism roots, Hall has one rant about how “Luis Suarez should be thrown out of football”, but overall the evening is dedicated to good-time vibes – which the band deliver aplenty.

The Specials MP3s or CDs

The Specials on Spotify