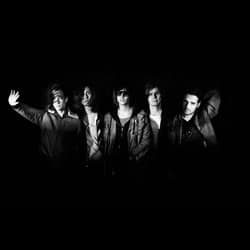 A valet at the Riviera says a man jumped from a 23rd-storey window at the Cosmopolitan last week. Says the guy lived. “Two options,” he says. “Either he’s a human vegetable, or he’s got more broken bones than Evel Knevel.” But there will be no jumping from windows tonight; The Strokes are in town after being holed away for years.

To look at the Cosmopolitan – the newest, hippest casino resort in Las Vegas – you’d have no idea that The Strokes were about to commandeer the place. Nothing on the marquee, no wall-sized banners. On the casino floor, it’s any Saturday night. Except for the influx of hipsters, like a mustachioed army of irony amidst the slim suits and tight dresses at the blackjack tables. None of the high rollers seems to quite know what to do with them.

And inside the Chelsea ballroom, it’s a sea of displaced rock ‘n’ rollers – Wayfarers and gingham, blazers and Italian boots – under posh appointments and glaring but tasteful chandeliers. The locale mirrors the look of The Strokes’ new music video for Angles lead single Under Cover Of Darkness quite exquisitely. It’s all very posh, sending a clear message that, yes, this is what it means to be a Stroke in 2011.

Opener Devendra Banhart sums up the evening’s atmosphere nicely, saying that though he’s in the middle of recording a new album, the chance to open for The Strokes at their first non-festival gig since 2006 was too good to pass up. “Since a long time ago,” Banhart says, “they have been an amulet against conceding or acquiescing to do anything other than what they do, and that is make soul music.”

A tense hour passes after Banhart leaves the stage, and in between the wafting clouds of marijuana smoke from the longhairs in the back and the passing cocktail waitresses pushing vodka Red Bulls, it’s easy to entertain the thought that maybe New York’s favourite sons have decided to further postpone their return.

Finally, just after 11, Casablancas, Hammond, Valensi, Fraiture and Moretti take the stage as if they’d never left. After the one-two punch of I Can’t Win and Reptilia, Casablancas stops to address the ravenous crowd. “Eff yes,” he says, slurring. And seeming genuinely taken aback: “You guys are fuckin’ loud!”

Older, and now wearing a wedding ring, Casablancas is not merely the disheveled punk he once was. His leather jacket and designer shades look expensive, but he still exudes a drunken sort of Joey Ramone cool. More than anything, he now seems more comfortable on stage, making jokes, hanging like a skeleton from the microphone stand and knowing when to back off the mic and let the crowd take over. Though he does seem a bit rattled when a audience member manages to climb past security and sing into the mic alongside him.

New single Under Cover Of Darkness leads a pack of four songs from Angles scattered throughout the performance (including You’re So Right, which is introduced as Space Jam), and it lands well, already sounding right at place sandwiched between the classics. The crowd sings along and mimics the squealing guitars like they’ve known it for years.

Above all, The Strokes sound bigger and louder onstage than their ultra-compressed recordings have allowed. Albert Hammond Jr’s guitar break in What Ever Happened elicits thunderous applause, and New York City Cops sends the whole room into twitchy fits, Casablancas nearly howling and Nick Valensi letting loose with the lead. Under Control sounds looser and more soulful than ever, Casablancas taking time to ride every syllable to its full emotional height.

The evening is over far too soon, as The Strokes leave the stage for the encore break after only an hour. It’s hard to fault them though; their songs tend to run just under the two-minute mark, pacing even faster live. They’ve left little to be desired, tearing through a roadmap of their 10-year career with complete abandon.

The encore closer is Last Nite, and it ends the night on a riotous high note, cementing the impression that The Strokes are indeed back in full force. Given their sparse touring schedule, these reclusive New Yorkers are certainly the band to see come this year’s festival season.