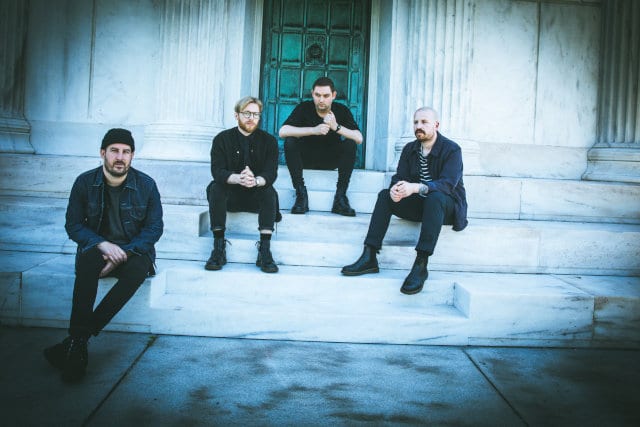 2019 has been significant for Scottish post-punkers The Twilight Sad. Having released their fifth album It Won/t Be Like This All The Time, their first with new label Rock Action, they’ve headline toured North America and played support for The Cure. They end the year with their biggest headline shows to date, at Usher Hall in Edinburgh and tonight at London’s Forum.

Tonight’s show starts with a stage bathed in red light as the band open with a run of songs from the new album: 10 Good Reasons, Shooting Dennis Hopper Shooting and VTR follow in short order. It is clear from these opening numbers that the reason the band don’t have a spotlight as such is that no one would be able to keep up with lighting lead singer James Graham. He is all over the stage from the word go, exploring every emotion conveyed in every word and commanding the stage like some Scots hybrid of Ian Curtis and Nick Cave.

By the time the set reaches older numbers Don’t Move and Last January, everyone is screaming every line back, and that largely continues for the remainder of the show. The drums seem to get ever louder and Andy MacFarlane makes his guitar emit brilliantly controlled noise. The pace doesn’t often let up, even when the songs are occasionally interspersed with Graham addressing the audience. Occasionally it’s a struggle for him, as the level of their accomplishment seems to take its toll.

In a week where Kathryn Joseph played Poke on her current tour, a portrait of Scott Hutchison has been unveiled at the Scottish National Gallery and Coldplay have given Hutchison a songwriting credit on their new album, there is renewed, and eminently justified, Frightened Rabbit love. Following Hutchison’s sad passing The Twilight Sad have been playing Keep Yourself Warm on a nightly basis, and the legacy of the song seems to have grown with the band’s increased popularity. Tonight it’s played again, and a big room full of people connects on an intimate level. The second chorus is sung back at the band; listening to a crowd sing “You wont find love, you wont find love in a hole” brings about goosebumps.

Their final song of the night is And She Would Darken The Memory. About a verse in to this final celebration the PA blows in the most almighty way, wiping out everything and making a horrific noise… and the band carry on anyway. Graham, now aware no one can hear anything, gives up with the mic, parades the stage like a Lion trapped in a cage, and manages to fully convey to everyone in the room just what this whole evening has meant to them. On one level it’s a disastrous end to the show, yet the concept of going out with a bang has surely never worked as well as it did here. Everyone is clapping, arms high, giving back the love for what’s been witnessed.

Casual onlookers might suggest that The Twilight Sad are riding the coattails of either The Cure or their new label’s owners Mogwai, but there is no doubt (as if there ever was) that these guys are well and truly making this on their own. As a live band their energy and passion is up there with the best; no one left in the room wasn’t hoarse from singing or deafened from the volume. It was always going to be interesting to see if they could grow in popularity while keeping the level of devotion clearly shown by theie hardcore fan base. This show well and truly showed such a transition was not going to be an issue. For The Twilight Sad, this was a fitting end to a triumphant year.