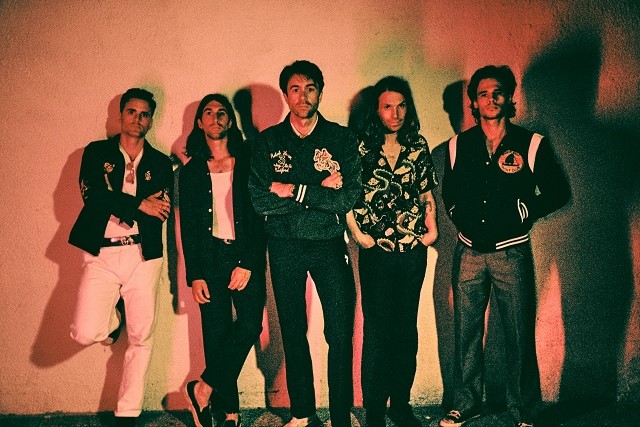 The Vaccines (photo by Frank Fieber)

You really wouldn’t wanna be the person who has to clean the venue after a show by The Vaccines. Case in point, Sunday night’s triumphant return to Brighton. Such is the joyous nature of frontman Justin Young’s showmanship that many a half downed pint of overpriced lager was either drunkenly thrown in the air upon hearing a favourite song begin or knocked out of your hand by the rambunctious crowd as they moshed in euphoric abandon to one of the many earworm choruses thrown at us. Other items seen hurtling through the darkness included a couple of cowboy hats, a random shoe and a loud request from one bearded bon viveur for Justin’s hand in marriage.

Speaking of wetness, that many folk had spent at least half an hour stood outside in pelting rain, waiting to get in did nothing to dampen their spirit. Waiting expectantly for the group to take the stage they all sang along to Chic’s Good Times and the obligatory Hey Jude, before screaming hysterically as the lights dimmed and Dick Dale’s Misirlou quickly segued into the band coming on and providing a hearty and rambunctious version of the spaghetti western glam banging Wanderlust from the band’s recent album Back In Love City. Incorporating some of the best worst rhyming couplets (Burrata and Sinatra, language and sandwich and militia and vanilla) and a rowdy, sweary chorus, for all of its populist naivety, betrays just how whipsmart Young and his bandmates are when it comes to crafting snappy anthems with instantly memorable lyrics.

On I Can’t Quit, which has the entire venue cooing along to its numerous oooh ooh oohs, Young shakes his head in cheeky tribute to his hero Paul McCartney and it’s easy to see a parallel between the two musicians. Hyped to a point where they couldn’t sustain the credibility thrown at them, they become a source of unfair derision by sombre critics, yet still managed to retain adoring fanbase by being enraptured with the music they make. In fact, at one point, possibly between the double whammy of Wetsuit and Post Break Up Sex, Young thanks the audience, promising that although it might sound like a cliché, this has been his favourite show of the tour so far, generating a pride filled cheer from the young crowd.

Five albums in, no longer the press darlings they once were, The Vaccines are consistently making some of the best pop music out there. Yeah, they relied on oldies like if You Wanna, I Always Knew to appease the eager masses but there was nothing landfill about any of it. Hearing new tracks like the glistening Pet Shop Boys do Americana of El Paso and the electro Ramones sassiness of Jump Off The Top, you realise they are minor masterpieces. See here’s the thing, it’s all well and good saying your influences are The Velvet Underground, Sonic Youth, Faust, Metal Machine Music or whatever, but deep down, we all still secretly skip whatever we’re listening to until ABBA comes on, until that 80’s power ballad or 90’s indie one hit wonder you never got truly overfills your headphones, baby.

Sliding out across the sodden floor into the waiting rain, you notice how many people, mostly strangers are smiling and hugging each other and rather than tut or raise eyebrows, the band have given people the urge to do something impulsive and reckless whilst the opportunity arises and that’s not something that anyone should ever take a jab at.