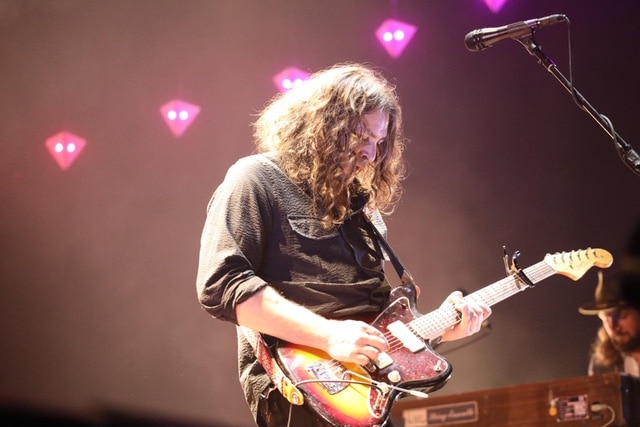 Sometimes a venue can really work against a band, particularly when it is filled with people who would rather chat endlessly about their own hollow lives, or photograph themselves having the “experience” of photographing themselves at a musical “experience” that they have no intention of actually experiencing.

So it is that the delicate beauty of Slowdive, who find themselves in the support slot tonight, is, initially at least, crushed on the wheel of endless, mindless chatter. They don’t go down without a fight though, and as their sound begins to grow and swell throughout their set even the most disinterested slowly start to come around. Watching their mouths slowly seize, their inane words stuck in their throats as the hypnotic wash of Sugar For The Pill finally gets through to them, is positively joyous. For a moment Slowdive’s pursuit of ethereal wonder creates a hive mind in the O2 (somewhere around the mid-point of When The Sun Hits) and heads begin to nod in unison, the scales fall from their eyes and the realisation dawns. This is the experience.

The War On Drugs have been on the road for 18 months in support of A Deeper Understanding, an album that took them from a band that had stadium-sized tunes to one that regularly fills stadiums. 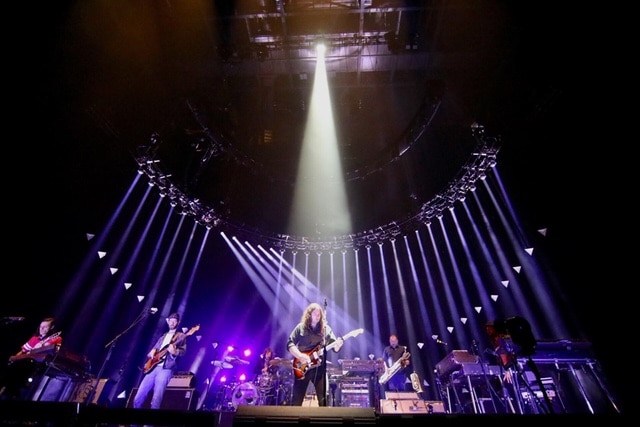 Their show at All Points East in June was perhaps one of the live highlights of the year and reduced a fair few to tears, such is the emotive power of their live performances.   But tonight they seem a little distant, not engaging with the audience much, and preferring to let the songs do the talking for them. Much of the set is culled from their last two albums, A Deeper Understanding and Lost In The Dream, with only two tracks from Slave Ambient making the cut. The band that made those hazy, droning records is now a different beast altogether, channelling the likes of Bob Dylan, Neil Young, Dire Straits and, to a lesser degree, Bruce Springsteen. For those who need to get lost in those drawn-out jams and unrelenting repetition, the opportunities are few and far between tonight. The band’s audience seems to have changed over recent years, with chest-beating and mid-’90s Oasis-era yells of “COME ON” not uncommon tonight. The Gallagher ape walk is, however, relatively absent. Thank heaven for small mercies.

Truth be told, The War On Drugs seem a little absent too. The songs are strong enough to hold their own, but whether it’s the venue or road-weary legs, they struggle to truly connect tonight. They sound perfectly fine, and the likes of Pain and Up All Night are full and delivered perfectly accurately, but there’s little in the way of edge to them. It’s not until Under The Pressure develops into a full-on cacophony that the band really starts to come alive, and there’s a palpable reaction around the venue too, a crackling electricity that finally brings the show to life. Sometimes all that’s needed is abandonment in noise.

They follow that up with Strangest Thing, riding the wave of excitement that they’ve finally built up, and then they’re off. Breaking the impetus before they return for Thinking Of A Place, whatever charge the room had held had already dissipated. As stadium-sized shows go, The War On Drugs hit the mark, with great songs, a pretty stunning light show and decent sound. For whatever reason, it just didn’t explode like they’re more than capable of. Hopefully a rest will do them some good.