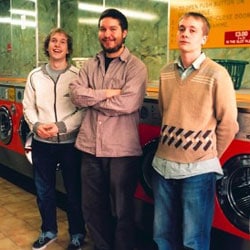 There are few bands as prolific as The Wave Pictures. Keeping track of their discography is a chore in itself, never mind becoming acquainted with it all – they’ve some five self-released albums, a handful of albums and EPs courtesy of Moshi Moshi and countless solo and collaborative releases under their belts. Tonight’s show marks the release of yet another EP. This time it’s a six-tracker called Sweetheart.

The release coincides with their 12 year anniversary, but there’s been little change in sound and style in the Wave Pictures camp – a fact reinforced by tonight’s support act, the band’s original drummer Hugh Noble. He performs the first half of his set alone with his guitar, in the corner of the stage, before being joined by his successor Jonny Helm and bassist Franic Rozycki. He left the band some 10 years ago but seems to be stuck in a Loughborough rehearsal room circa 1998. His lyrics are cringey, sixth form rants and woes, stuck together with Wave Pictures’ style of jutting indie-folk. The only problem is, whereas they’ve taken the formula and run with it, Noble’s yet to manage the first level.

The band themselves pick a surprisingly subdued opening track, Susan Rode The Cyclone, quickly followed by the brilliant Strange Fruit For David, taken from their masterpiece Instant Coffee Baby. It sees them at their lyrical best; the audience knows the words inside out, but that doesn’t stop them laughing at the nonsensical genius of the chorus: “A sculpture is a sculpture, marmalade is marmalade, and a sculpture of marmalade is a sculpture but it isn’t marmalade…”

The highlight of Sweetheart, Cinnamon Baby, is already a crowd favourite. A grimey, bluesy, Nick Cave influenced track, it props the EP up, and while it slots into the set easily with their beefy back catalogue, following track Friday Night In Loughborough serves as a reminder of the brilliance of Instant Coffee Baby. It tells of the inhabitants of their home town and recalls mis-spent hours loitering around local landmarks, all set to a Violent Femmes-esque DIY sound.

With so many songs to choose from, fans could be forgiven for expecting a different set at every gig, but there are certain traditions the band stick to. A highlight of their live show is when a seemingly reluctant Jonny ‘Huddersfield’ Helm leaves the drums to take to the mic for Sleepy Eye – a heartbreaking love song that has the crowd enthralled, equally laughing and awwing. He nods his head around, and sways with his arms behind his back like a toddler at a nativity play, but his audience are so captivated by this gangly, unassuming youth, that you can hear the door at the back of the venue creak open.

Taking advantage of Helm’s likeability, his wild drum solo peps things up during a speeded up version of I Love You Like A Madman, and he’s back on vocals during the encore for Now You Are Pregnant, looking utterly clueless as he delivers the wide-eyed line: “Johnny Cash died tonight and you say it’s not like Elvis though is it…” The show’s aptly wrapped up with Just Like A Drummer, which sees Helm shaking off the shyness he adapts onstage, bashing the drums with the confidence that saw him doing his best Bez impression, playing meracas onstage with Allo Darlin’ the night before.

He’s the star of the show, and adds a personal, intimate edge to a gig that feels a bit too big for them. In contrast to their show at the Borderline earlier this year, it’s not quite a sell-out and, with the exception of Jonny’s songs, sections of the crowd are happy to chatter among themselves between the big numbers, and the writhing guitar solos feel a little grandiose. At this point in their career, a few records after their big album, they’re unlikely to pick up new fans, so may well be better off sticking to little venues and looking after the ones they’ve already got.