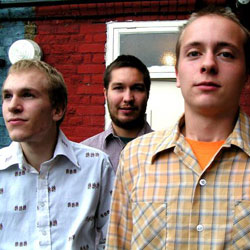 Apparently The Wave Pictures have been going for quite some time.

If they have been travelling with instruments in tow for a decade now, they may have passed unnoticed. But not by the glorious likes of the late John Peel and the few others that are willing to take a chance on a (sorry Bambi) little-known plaid shirted band.

They’re efforts so far are incredibly symptomatic of a band who simply do not exist with gimmick. They do not have special birthday outfits or own a name like ‘Die…Kill…Eat…Your…Own…Liver’, and this, sadly, is probably why they’re not number 27 on NME’s Cool List – as incomprehensively offensive and trivial as this seems.

So in this somewhat demure setting of the Leeds Library, promoting new EP Just Like A Drummer, are Dave Tattersall, Franic Rozycki and Jonny Helm, playing for people in spectacles. And the bespectacled plenty are happy to see them, nursing their pints and whispering, “I thought you put me on’t guest list?”

Simply, they are modest and demure. Tattersall’s lyrics are poignant for the quaint, sweet, observant individual on I Love You Like A Madman: “I’ll buy you bras instead of pickled eggs, chocolate instead of chutney, good red wine instead of bad red wine, next time I’ll remember your birthday.” Who wouldn’t like a man that rhymes chutney with birthday?

And his voice manages the twist. But his poetic grace, as he rocks to-and-fro on his heels, isn’t all saccharine and pickled eggs. His voice in all its hypnotic turns, has a deadpan default that makes him dark, awkward and humble.

Rozycki and Helm are jovial and steady, creating a ditty reminiscent of Belle And Sebastian with occasional fiddle or trumpet. It could be folksy, could be surf pop at times, and most certainly is Dave’s blues as they play through Leave The Scene Behind and Dust Off Your Heart.

As they look from one to another in assurance, they have a real air of familiarity with their work that artists could only have from honestly persevering. The Wave Pictures deserve every good word written about them, in credit for every lovely word Tattersall has delivered.