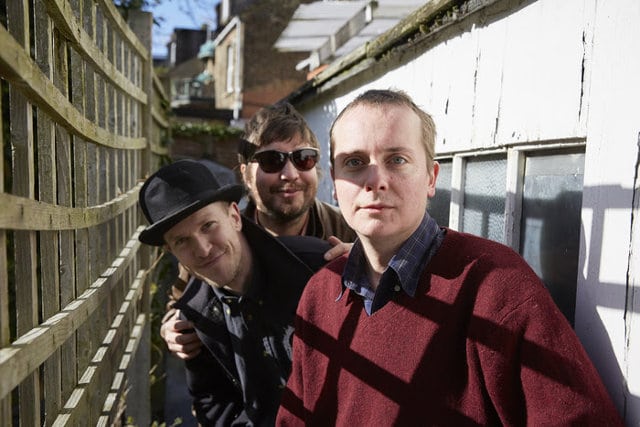 The Wave Pictures do things the old-fashioned independent way. They are not the typical beneficiaries of the usual tastemaking websites. There is no Best New Music tag next to their name – at least, not recently. The London-based band are now in their third decade together, and they represent what happens when you forge your own path, when the machine is bypassed. The following they have is vehemently their own, but then again a special level of devotion is required when a band release an album at a rate of more than once a year over that stretch of time.

How many indie bands are rich? The Wave Pictures, even after all these years, are still plying their trade in front of audiences of just a few hundred. Nevertheless, this is a business model that appears to be working for them. Anyway, if success is measured by the affection of your fans, then tonight’s show at the Soup Kitchen in Manchester might as well be taking place in a stadium.

The 90-minute set draws from all corners of their archives, most tracks having built-in pockets where one of the core trio can set their raging virtuosity gallop free. The Blues Brothers-shaded cool bass daddyo Franic Rozycki fights to suppress a smile when lurching into each of his solos; during The Woods (from 2013’s City Forgiveness), Jonny Helm explodes his way through what frontman David Tattersall later declares to be “the greatest drum solo I have ever seen”, a genuinely reasonable judgement.

They wear their musical talent lightly, but they do carry with them some of that vintage mystique that the great players used to enjoy back in the classic rock era. Whenever Tattersall limbers up for a solo, most dazzlingly on 2015’s Pea Green Coat, one half expects to see somebody hold up a ‘TATTERSALL IS GOD’ sign. Indeed, it is hard to think of a British contemporary with such a fetishised command of a fretboard.

Among the night’s most fascinating detours are a cover of Daniel Johnston’s Hoping, a 50-second ditty in original form but. with The Wave Pictures as guardians. it becomes a sliding, freeform freakout. Another is Remains, a track the band wrote in tribute to their favourite writer Charles Bukowski and released on 2016’s A Season In Hull, and which tonight sounds like Nick Cave deciding to reform Grinderman for five glorious minutes. An hour in, Helm steps out from behind his drum set to take centre stage. The track he launches into is the first song this band ever wrote, Sleepy Eye, some 21 years old this week. Remarkably, the crowd appear to know the track as well as any other.

Tattersall takes a moment to reflect on the special connection in the room. He notes that their recent Birmingham gig was met with a more tempered response, but it’s hard to believe. There is a commitment of intent from the audience tonight that comes from being made to feel a part of the success. When they return for an encore, a dozen different track titles are shouted toward the stage. There is a pause as the band authentically attempt to decipher the most popular request, and the winner is Stay Here And Take Care Of The Chickens, culminating in a call-and-response celebration that captures the spirit of the night in miniature.

Ironically, The Wave Pictures’ prolific album turnover is probably one obstacle to growing their audience. Where does a new listener even begin when confronted with a back catalogue like this one? It’s give and take, but when you see the love that passes from crowd to stage and back again tonight, it’s hard to say that The Wave Pictures aren’t doing this exactly the right way.