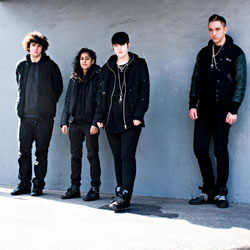 Rather than take it easy on the eve of their biggest headline tour so far, The xx were instead ending a nationwide series of sold out concerts supporting fellow Londoner Florence And The Machine.

While she ruled over the night, it provided a good opportunity to see how things were shaping up for the moody foursome from Putney ahead of their next chapter on the road.

With an album likely to feature on many a best-of-year list, they’ve managed to acquire quite a profile and there was an appreciative audience waiting for them to arrive. That’s despite them appearing to be the polar opposite of Florence, the lady most people are here to see.

Where she is loud, brash and over the top, as demonstrated later by her typically theatrical show, The xx are quiet, downbeat and minimal. Yet in fact there is common ground. Both acts drip with drama. They’re both full of emotion and are able to provoke reactions and wrench hearts with the worlds they create. So while some might not be sure about this seemingly out-of-place act, they’re enjoyed by the majority.

The richness of the album, xx, is obvious as singers Romy and Oliver lead us through some its highlights. While not staying entirely true to its order, VCR, Crystallised and forthcoming single Islands all appear early in the set, as they do on record.

Then it’s time for their traditional live cover of Womack & Womack‘s Teardrops. It is stripped of its original dancefloor appeal and injected with ghostly guitar strumming and heartfelt vocals. It adds a wholly new dimension to a familiar song, and as their voices play to each other, the benefits of the interplay between girl and boy is demonstrated.

On the subject of their voices, their styles are laid back and effortless. Romy tends to hit her notes more frequently than Oliver does, but that doesn’t matter too much. As long they’re somewhere in the vicinity of accuracy, the mood is kept. As expected, everything else is similarly low key, from their outfits (all black, naturally) to their postures (all four stand at the front of the stage looking down). Romy’s fringe in particular makes it hard to see her face.

But it all seems honest; they come across as genuinely quiet people who are making music that has somehow brought them to this big stage. Some may argue that a bit more showmanship would destroy the atmosphere, but if that’s to come, it will come with time, experience and confidence.

What is amazing is that they can make such addictive music out of such bare melodies and instrumentation. But somehow they make the listener want to hear more. Perhaps it comes from their love for r’n’b grooves and their stated admiration for such commercial entities as Mariah Carey, Aaliyah and Missy Elliot, but they employ subtle hooks to draw you in to every tune.

As examples, Shelter and Infinity appear as a glorious double-header of passion and beauty. So simple and understated, they pack a heavy punch and insist on sticking in the mind. Certainly a great debt is owed to Jamie Smith who is responsible for the beat programming that adds a kick to everything the band does. He even gets people almost-dancing to Night Time at the close of the set.

The xx somehow manage to marry shoegaze with pop and intense drama with relatable lyrics. They don’t have a vast selection of songs, but what they do have are superb. As they begin the next tour in their new role of main draw, it’ll be interesting to see whether or not they add anything to the mix. But it would definitely be worth going and finding out.