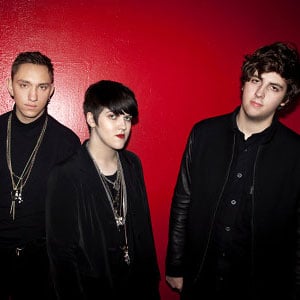 A year ago The xx’s live show consisted of four terrified looking friends stood stock still, whilst the songs from their excellent debut album stuttered and stalled around them. If co-vocalists Romy Madley Croft and Olly Sim so much as rolled their eyes to either the left or right, it was genuine caause for excitement.

Fast forward 12 months and the trio (keyboardist Baria Qureshi left towards the end of 2009) find themselves headlining a night of the Summer Series in the sumptuous courtyard of Somerset House. Confident, and now with – whisper it – a slight swagger, the band are here to show what a year of constant touring does to a band.

On this evidence, it’s turned them into genuine entertainers, albeit ones in uniform black and still with limited stage banter. Arriving on stage at around 9.45pm, they launch straight into an extended run through of Intro, its clipped beats and soft “ahhhs” supported by the sort of booming bass that makes chests throb. Visually, the stage is as minimal as the band’s musical pallette, with Croft and Sim stood either side of two large ‘x’ light boxes, whilst multi-instrumentalist Jamie Smith tinkers about on a raised platform behind them.

If the band are bored of churning out an album that’s surely a shoe-in for this year’s Mercury Prize, they don’t show it. VCR and Islands maybe crowd favourites (and, thanks to endless to TV spots, slightly over-saturated), but there’s never the sense of them being tossed out without conviction. At the heart of their sound is the interplay between Croft and Murs, the former delivering each line with a swollen, world-weary vocal, whilst Croft underpins it all with his low purr. In fact, it’s Murs’ transformation that best sums up The xx of 2010. Gone is the static, rabbit-in-the-headlights look of old, and in its place is a man comfortable enough to strike quite a few rock star poses, complete with hip-swivelling moves so unexpected it would’ve been less surprising if they’d shown up in JLS t-shirts.

Equally unexpected is the way they suddenly drop a quick cover of ATB‘s Ibiza anthem ‘Til I Come into the slow-burning Shelter, or the finale of ticker tape that erupts during Infinity, causing a breakout of smiles not always associated with a band whose music, at least on the surface, can be icily detached. But the beauty of that album, and of tonight’s performance, is that the band manage to imbue their songs with heartfelt emotion, with Croft’s delicate guitar lines punctuating lyrics that revolve around two people being inseparable.

Following the ticker tape explosions the band slink off, cacophonous cheers ringing in their ears, before returning for an encore of the album’s closer, Stars. As a backdrop of twinkling lights appears and darkness takes hold, it’s the perfect setting for a band whose slow-burn appeal has only endeared them further. Tonight is confirmation that they’re more than just the next big thing; they’re here to stay.