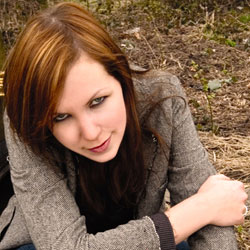 “Around this time last year I was waiting to see an Elvis Costello gig with Janice Long,” Thea Gilmore tells a packed Bush Hall.

“She was moaning, saying that soon she’d have to start playing all the same old, rubbish Christmas songs again, and that we needed a new Christmas song. She said ‘Write one, Thea’ and when a national radio presenter tells you to write a song, you do it.”

But Gilmore, never the slacker (at the age of just 30 she already has an impressive nine studio albums to her name) didn’t come up with one song – she recorded an entire album of festive tracks. Tonight is a celebration of that album, Strange Communion. But despite the festive theme, she insists, there will be no cheese.

Album opener Yoko Ono‘s Listen The Snow Is Falling sets the tone for the night – delicately bitter sweet. It’s followed by the rather more upbeat Saviours and All, from Rules For Jokers. Usually the lynchpin of her set, it’s the 2002 album’s only offering this evening. In fact oldies were scarce on the ground full stop – Liejacker’s Icarus Wind and Old Soul, The Threads EP’s Are You Ready, Avalanche’s Mainstream and December In New York, which was re-recorded for Strange Communion, are the only tracks dug out from her back catalogue.

It wouldn’t be a Gilmore gig without some audience participation. Tonight this comes in the shape of a brand new song apparently written after someone asked her whether there was a need for protest singers any more. “Oh, come on!” the audience jeers, following her cue, before she slips back into serious mode with the festive Cold Coming, followed by Drunken Angel.

It’s all drifting along nicely until album highlight Sol Invictus comes along and fires a lightning bolt through the room. If there were a more perfect setting for this track, you’d be hard pressed to find it. Sounding like a 300 year old hymn, it’s near-impossible to believe it’s the handiwork of a 30-year-old from Oxford. It has spine-tingling authenticity and, as her band leaves the stage, her voice echoes among the high ceilings and chandeliers and the room’s in deadly silence. It’s in stark contrast to her chirpy on-stage banter, which sees her joking with collaborator, producer, guitarist and husband Nigel Stonier.

But that’s Gilmore through and through; her ability to switch gears is one of her most endearing qualities. Since being ‘discovered’ by Stonier as a teenager, their volatile, on/off relationship has been the source of some of her most cutting, brutal work. That working relationship, in the midst of all manner of personal crises, provides an interesting aside and a chance to apply cod-psychology to some of her more obscure references.

After a cover of Blue Christmas, a re-working of December In New York and Liejacker favourite Old Soul, the set’s given another boost by the song she came up with to solve Janice Long’s festive tune woes, the sing-along That’ll Be Christmas. Her trademark sneering wit shines through, as she quips “French beer and mistletoe, faith hope and gluttony, me missing you again, that’ll be Christmas.”

As quickly as the Christmas cheer is spread, it’s snatched away with a cover of Elvis Costello’s The St Stephen’s Day Murders, to which Mark Radcliffe lends his vocals on the record. Going back on Gilmore’s promise of ‘no cheese’, violinist Fluff Smith produces a home-made dart board with more traditional Christmas songs written on it, and asks a member of the audience to aim at one – “our port and stilton moment,” she laughs. The result is a near-perfect version of Have Yourself A Merry Little Christmas.

A solo encore of Mainstream and Old December serve to again reinforce the brilliant, bittersweet contrast in her work – one minute she’s up, the next she’s down, and all the while her crystalline voice pokes away at your heart, taking it along for the ride. A new-found on-stage confidence suggests she might finally be beginning to believe in herself. And it’s about time – she’s coherent but poetic, vulnerable but bolshy. Simply one of our most under-rated musicians.