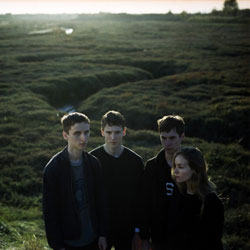 Covering your album with brass and woodwind, enormous Japanese drums and a full choir is one thing; trying to recreate this in a West London venue that only holds a few hundred and has a stage the size of a handkerchief is another.

Full marks to Jack Barnett for trying, then, even if the final effect isn’t quite a faithful recreation of what These New Puritans were able to accomplish in the studio. The live performance might not have the polished layers of Hidden but the rawness that replaces it is, in its own way, just as interesting – an urbanisation that sounds at times like a more industrial Mike Skinner, somewhere between spoken word and rap preaching to the nu-wave survivors of a post-apocalyptic wasteland.

With only two albums’ worth of material to draw on, the night leans heavily on the recently released Hidden, making full use of the tiny orchestra Barnett has assembled. These heroic classicists also double as the spooky children’s choir that suffuses the album – the audience, of course, are far too ber-cool to sing along.

Bush Hall, with its air of faded opulence, stucco ceiling decor and chandeliers is the perfect setting for TNPs’ mix of chamber music and machine gun drums, reverberating with the low chords that pulsate to the very foundations of the venue as flashes of blood red light accompany the deepest beats. Against this backdrop, Barnett looks ghostly and ethereal, and sounds even more otherworldly.

The evening begins with new album opener Time Xone, setting the stall out firmly with the more recent material. This is followed up with single We Want War before Barnett ventures back into the past for Swords of Truth. The earlier material sounds sparse and visceral against the new, showcasing how far he’s come since debut album Beat Pyramid – itself an aural assault on everything conventional and safe in music.

Chains hang between the drums, as much a part of the musical repertoire as the more traditional instruments to stage left. At times pure classical, at others post-punk industrial dancefloor, alternately harmonised multi-voice choir and white boy hip-hop, the musical history of the past three hundred years is thrown together and smelted into something you’ve never heard before.

The power and fury of Attack Music and Fire Power in particular have a strength live that surpasses what could be created in the studio, as Barnett spits out his lyrics to an audience who can feel the weight of his music bearing down on every inch of bone and sinew.

It’s the encore, however, where he shines most brightly. Reaching back into the past and pulling out Infinity Ytinifni’s screamed refrain ‘China! India! My future! Scatter!’, he sends us out into the night, ears ringing and slightly dazed by the experience. It’s been a rather short set, at barely an hour and only a dozen songs but as TNPs know, there are times when less is very definitely more. Barnett knows exactly what he’s doing and we should be damn glad.