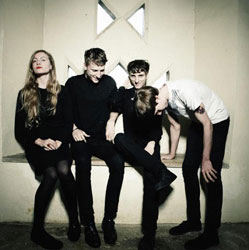 Seeing on-the-up bands in a regional venue is always a mixed bag.

There’s you, 50 hugely enthusiastic teenagers, a couple of men in horn-rimmed specs and German army surplus trenchcoats, and the parents of the support band’s bass player.

The sound quality in the room above the pub leaves a lot to be desired; but what the hell, everyone’s here to enjoy themselves, and there ain’t much else to do in Cambridge on a Saturday night. In any case, short of signing to a major label, this is how reputations are forged.

Cambridge band The Resistance are definitely getting there. They took a couple of songs to settle into a tight, sleazy motorik groove; but when they did, the effect was impressive. Dressed in black uniforms emblazoned with the band’s logo and splashed in projected light patterns, they did a fine job of escalating a humble support slot into a multimedia Krautrock happening. Droney and mesmeric, this was reminiscent of Can or Neu! at their most rhythmic. One niggle: the manic capering of frontman Matt (at one stage clambering onto the bar and using the lampshapes as percussion) felt surplus to requirements in the context of the enigmatic tone created by the music and visuals.

Grammatics, a clearly talented and ambitious four-piece from Leeds, were even more affecting. With their falsetto vocals, electric cello and anthemic song structures (not to mention the floppy fringes, cardigans, rosettes and button-down collars) it initially seemed natural to pigeonhole them alongside Arcade Fire in the ‘sensitive indie’ camp. But, with nods to Muse and the Smashing Pumpkins there was an uncommon muscularity behind the lushness, verging on metal at times and certainly rescuing them from any accusations of tweeness. With arch asides and notable charm, frontman Owen Bridley seems to be picking up where Jarvis Cocker left off. An iron fist in a velvet glove.

Good, then, that the support bands made such successful efforts to seduce their audience; because headliners These New Puritans didn’t seem quite so bothered. The spiky, intense art-rock of their Beat Pyramid album never really had the chance to come alive here. This was partly due to a murky sound quality which smudged the icy precision of their sound; partly because they didn’t seem particularly excited by the experience of playing to 50 people in a poky backstreet in Cambridge; and partly due to a very short set indeed. The audience heard (and, admittedly, went nuts to) the tracks they came to hear: Numbers, Elvis, En Papier, and Infinity Ytinifni. Then there were two new songs; and that was it. Lights up and out the door, please. Twenty-three minutes? Come on guys, youre not The Ramones: well not yet, anyway.