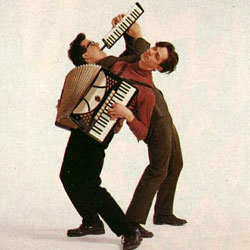 The opening two numbers of They Might Be Giants’ gig defined how the rest of their set would play out, juxtaposing their 1988 track Cowtown with Meet The Elements from their most recent disc Here Comes Science. All night the set list swung enthusiastically between the edutainment songs from their recent forays into children’s and family-friendly records and the seminal pop songs they’ve been touring for the best part of a quarter of a century.

One of those old favourites, Birdhouse In Your Soul, almost succeeds in getting a reserved and seated crowd to give the band a standing ovation just five songs in to the set. It might be a little too early in the night, but the band have sensed the pent-up energy and it won’t be long before calls of revolution are made.

Of two shows for See Further: The Festival Of Science And Arts, the evening slot is ostensibly for the traditional fans of the Brooklyn two-piece and their touring band. The earlier matinee performance was billed for those fans who by now have young children and enjoy the latest incarnation of TMBG – an “indielectual” version of The Wiggles – as a family. The night time show included their back catalogue as well as a selection of the newer tracks designed to bring out the child in everyone.

The dynamic of the venue changed when bespectacled John Flansburgh implored the audience to break free of the shackles of their seats and rush the aisles during Clap Your Hands. In no time the front of the theatre was crammed with a mini mosh pit. During the consistently true Older (“You’re older than you’ve ever been / And now you’re even older”) there was a long pause as the audience was left to ponder the march of time. Naturally this meditation on mortality was assisted by a shower of coloured paper from an onstage confetti cannon.

As well as an ear-popping, lung-busting clarinet solo, plastic pigeons littering the stage and pre-show a remote-control flying penguin and jellyfish, there was a guest appearance by two rock ‘n’ roll sock puppets known as The Avatars Of They. Voiced by the two Johns (Flansburgh and Linnell) the Avatars appeared twice during the show, projected on a cinema screen, to crack wise and sing a couple of songs, What Is a Shooting Star? and Stalk of Wheat. Like the rest of the gig, the Avatars were hilarious fun.

Returning for the first of three encores the Giants played Dead in front of a couple hundred complete strangers who linked together to lead the rest of the audience in a swaying chant of “And… And… And…” It’s the perfect indication of how well these New York City songsters have touched and united an international fan base who happily sing along to bizarre tales of Mesopotamians and a battle between a triangle and a person (Triangle wins). They Might Be Giants are here to remind us all that while we indeed get older by the second, we are in no way required to grow up.