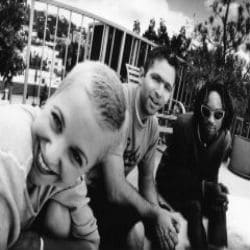 Considering Throwing Muses have been together off and on for almost three decades, it was no surprise that the audience at the Shepherd’s Bush Empire resembled a reverse Logan’s Run where no-one under 30 existed. The crowd of enthusiastic Generation X-ers illustrated perfectly the loyal fan base that this Rhode Island band have maintained over the years.

Although highly influential at the time, they have arguably since been neglected in comparison to their contemporaries on the 4AD label – hence the only teenage presence during the night being the lacklustre support band. The expectant crowd made for a respectful and appreciative audience with only a handful of irritating smart-phones raised aloft. Sometimes it’s just great to be in a room full of people who know they’re in for a real treat and are determined to enjoy themselves.

As the trio took to the stage a punter playfully yelled out “Get on with it!”- a harmless piece of banter indicating the height of the crowd’s expectations and the fact that chances to see them live are few and far between. This tour coincides with the release of a best of anthology, and true to its promise, we were taken on an extensive tour through their back catalogue. The evening’s set, and the accompanying Anthology album, prefer to dwell on band favourites and rarities instead of the more commercial sound typified by the contributions of erstwhile member Tanya Donelly. Their most successful album The Real Ramona was hardly represented, but there is such a wealth of other material that its absence didn’t feel conspicuous. Within seconds of the band beginning to play the predominantly middle-aged crowd were effortlessly transported 20 years back in time.

The stage was probably too big for just the three of them, but even if they didn’t physically occupy the space they certainly dominated it on a sonic level. Kristin Hersh‘s performance was unassuming, yet assured. They have never been the kind of band to plump for gimmickry and it’s refreshing to see an act that doesn’t needlessly showboat in order to keep our attention. The music was allowed to speak for itself.

The Empire’s sound mixing can sometimes be unforgiving on a vocalist and this gig was no exception. Hersh’s distinct voice – something that spectacularly veers between purring cat and grizzly yodel – felt shackled by the venue’s limitations. It was still unmistakably her, but a little muffled for the first half of the performance. This was no fault of her own and in some respects wasn’t a bad thing because it brought the other distinctive elements of Throwing Muses into focus. It’s too easy to take Hersh’s brilliant guitar playing for granted for example, or David Narcizo’s drumming that sends out thunderous, thumping waves into the audience. The gig was a strong reminder that Throwing Muses really do rock and this is something that the crisp production of their studio recordings can sometime hide.

With a hefty set-list and two encores the assembled fans were left happy. Even though most of the crowd were already well aware of their brilliance, the night was a strong reminder of the potency of an often overlooked band and a good excuse to go back and rediscover them once more.