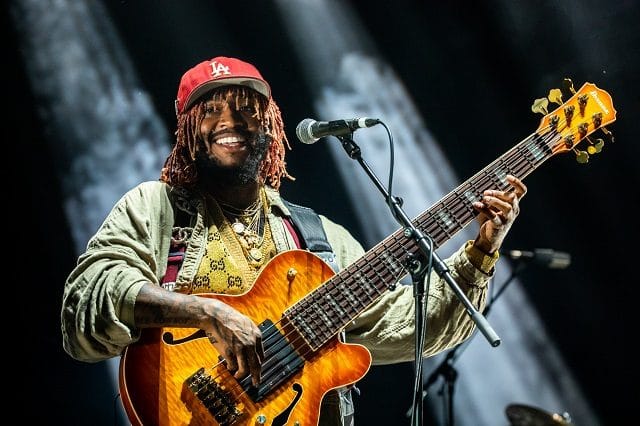 There was a time when bassist Stephen Bruner was best known for collaborating with other artists such as Erykah Badu, Flying Lotus and Kendrick Lamar but the release of Drunk in 2017 under his Thundercat alias changed all that. While he had already released two albums before the arrival of Drunk it was this collection that really propelled him into the next league and made shows like tonight’s Royal Festival Hall appearance (as part of Nile Rodgers’ Meltdown festival) possible.

Support comes from New York quintet Onyx Collective who play an impressive genre-straddling set while also emitting an undeniable coolness. Later, Bruner is joined on stage by drummer Justin Brown and keyboardist Dennis Hamm and together they make a formidable trio. They may start with the first three tracks from Drunk but it quickly becomes clear that this won’t just be a reprising of material however. Opening track Rabbit Ho elicits cries of approval from the crowd and Bruner grins back, asking “you guys like that song?”

This is one of the ever-present factors in tonight’s show – he smiles his way through the entire show from underneath his red cap. Captain Stupido is next, sounding more emancipated than on record and delivered at rapid speed. Uh Uh features mini jazz-piano runs and, with its accompanying strobe lighting, also offers the first sign of the sensory overload that will define tonight’s show. They also help tentatively develop the idea of Drunk being a leftfield jazz song-suite not a million miles away from Smile by The Beach Boys.

A Fan’s Mail (Tron Song Suite II) shows how songs are stretched out from originals, almost to breaking point in some cases. It’s evident on Tron Song also which accommodates the first of many instrumental bolt-ons tonight, showcasing some incredible bass playing from Bruner and shamanic drumming from Brown. Hamm may not be as visually striking on keyboards but he’s the glue that holds everything together.

Song For The Dead has three-part harmonies that wouldn’t be out of place on a Crosby, Stills & Nash record and starts noticeably slower than everything else played prior. Before long however they can’t resist speeding things up and forcing the music to go in different directions. There are times when it feels a little congested but in most cases they ultimately manage to reconcile and untangle.

Some tracks work perfectly however – Heartbreaks + Setbacks sounds supremely breezy and carefree, like driving down the Pacific Coast Highway in an open top car, the wind blowing through your hair. The wonky synths of Friend Zone sound just as good. Later, they start playing Without You but sadly soon abort it due to Bruner forgetting the lyrics. It seems to momentarily throw him and some of the extended jams that follow see him travel down some musical cul-de-sacs that he can’t quite fully extricate himself from (although the squelchy funk of Them Changes offers some redemption).

A cover of Flying Lotus’ DMT Song ends the show which, while definitely uneven and excessive in places, on the whole delivered an enjoyably brain-scrambling psychedelic odyssey through the outer reaches of funk, jazz and soul.