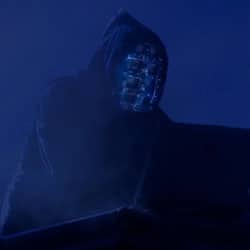 Oblivious to the West End traffic that spews out around it, St Giles-in-the-Fields is more used to the chamber music niceties offered by its lunchtime recitals. But tonight, Montreal-based noise artist Tim Hecker herded an audience inside, switched off the lights, and constructed a set of visceral intensity, repeatedly shaping and obliterating walls of noise through the manipulation of the church’s miked-up pipe organ.

Reliant on a sensitive feedback system between the organ and computer, with the instrument’s sound fed through distortion pedals and out of the PA system, Hecker produced a very physical music obsessed with climaxes, occasionally boiling over to make way for moments of raw, shifting melodic plains.

Last year Hecker spent a day recording the acoustics and particular sonorities of a pipe organ in a church in Reykjavik, and used these sketches as the architectural basis for his record Ravedeath, 1972, with the organ music subject to brutal contortions and smeared through with guitar noise. In St Giles, Hecker worked to take his waves of sound to similar heights on his opening track The Piano Drop, reached via a glorious accumulation of ambient wash, streaked with minute percussive textures. It is remarkable how Hecker’s brand of sound art, with its mapping of peaks and troughs, never requires the listener to work particularly hard.

Hecker’s preference for secular spaces is noted, and indeed he has talked about the process of Ravedeath, 1972 as being one in which the original and overt theological elements of the sound were consciously removed. Yet in Monday’s set, the sound of sunken cathedrals was inescapable. The performance in a pitch-black church almost seemed to drag attention towards St Giles’ rising columns and vaulted ceiling. Acoustic manipulation was brought to its extreme in shaping Hecker’s ambient soundscapes. The church became an instrument itself; its resonant space as important as the crafted sound.

In plumbing the internal depths of the instrument, we were exposed to the full gamut of the organ’s palette. Kaleidoscopic textures and shimmering immersion points formed a patchwork that swirled and gaped throughout. Hecker provided a masterclass in non-confrontational tension, with his sculpting and perpetual extension of breathing sound clusters. Yet while so much of the beauty came in the elusive music of the moment, coherence was still all on display. Hecker’s newfound interest in organic instrumentation as a means for exploring sound sculpture, as documented on Ravedeath, 1972 and through live performance, is a fascinating project to experience.