by Camilla Pia
published: 3 May 2008 in Live Music Reviews
Tweet 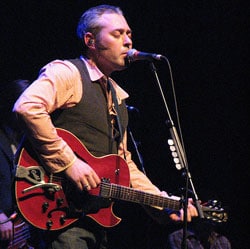 When you wake up to find a buffoon in charge of London and neither alcohol nor endless discussions about how, who or why have helped, it’s hard to find ways to lighten the mood.

Thank heavens then for Tindersticks who, despite this appearance coinciding with a dreary day politically and a reputation for making slightly maudlin music, manage to pull out all the stops for this extra special Royal Festival Hall performance.

Tonight’s support comes from Sara Lowes, who has spent years lending her dreamy vocals to acts like King Creosote, The Earlies, Micah P Hinson and Jim Noir, but her days in the shadows are long gone if this remarkable display is anything to go by, as the crowd are quickly won over by the talented Northern lass’s swoonsome, melancholy offerings. Lowes sits for the most part at the piano, but also plucks at the acoustic guitar, and during one song even treats us to a saxophone solo on the kazoo, while her drummer plays the bass with one hand, coaxing out steady rhythms with the other, and stopping only to pick up a trombone for another playful solo towards the end of the set.

After this impressive and hugely heartwarming start to the night, the mood is set for our much-loved headliners to take to the stage and they do not disappoint, as Intro from their well received latest effort The Hungry Saw builds from quiet beginnings with one sole musician tapping at keys to a 15-piece guitar, brass and string-fuelled romp, complete with main man Stuart Staples bashing a tambourine.

In these grand surroundings with its warm lighting and perfect acoustics, Tindersticks’ music triumphs as if it was made to be played here, tracks from both the last album and from throughout the band’s 16-year career, provoking hysterical responses from the enraptured audience as the band veer from pretty, stripped down ditties to full-on powerhouse orchestral eruptions.

As ever it is Staples who steals the show, however, looking every bit the elder statesmen of indie that he has become, in a smart shirt, waistcoat and pointy brogues, and jigging and hopping around the stage jerkily, returning only to the microphone to deliver those trademark sublime and breathy vocals that manage to both unsettle and soothe at the same time.

Classics such as Travelling Light and If You’re Looking For A Way Out really bring the house down and as the act return for a second encore, following a spectacular finale, one over-excited punter screams out “you’re still the best band in the world”. On form like this you’d have a tough job arguing with him.