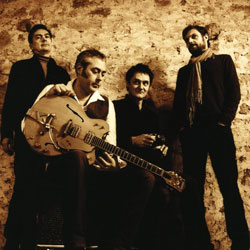 In the old-school pub of British indie, Tindersticks have long been muttering into their tear-addled drink in a dim corner.

Peddling melancholia since their eponymous first album in 1993, the recently slimmed-down line-up are now promoting their latest release, Falling Down A Mountain, with a light smattering of live dates, rather than a big tour. This is very much a band settling into a long, strange middle age. Live, they had an introspective quality that mirrored the music itself, which is for staying up late alone with, not dancing with friends.

Gravel-and-honey-voiced frontman Stuart A Staples looked magnetically tragic under unforgiving lights, clutching a melodica to his breast for all the world like a bottle of whiskey. The green spotlights during one song rendered him a magical alien being come from afar with tales of low-level misery. With the looks of a haggard survivor and a voice reminiscent of a sweeter Tom Waits, his habit of wiping his face between songs gave him the air of a battered but undefeated boxer. At a couple of points, he wandered offstage while the note-perfect band cranked out a sad instrumental, returning to growl, in one of the few instances he actually spoke between songs, “Maybe I should have stayed away for longer.”

As Staples returned to the microphone for bout after bout, the band worked their way through a set that covered everything from the sprightlier, soul-inflected Can We Start Again? to intense, doomed ballad The Other Side Of The World. Besides being a surprisingly technically good singer, Staples is also a great lyricist, and in the reverential, hushed lines like “You saw your life as a series of complicated dance steps” (from Marbles) kept their odd, nagging power. Cellist Andy Nice helped create a melancholic backdrop – cellos are almost cheating with their instant added twilight, but Tindersticks are hardly in need of the extra gloom and their use of strings, woodwind and extra guitars brought in a perversely hopeful note.

It’s not so much that Tindersticks are lacking in crowd-pleasing tendencies, but they don’t want to be seen as aiming to please. Nevertheless, they come across as nothing less than consummate performers, albeit in a broken-down back room at the end of the world. An audience of rapturous fans lapped up every song, even the new ones which dominated the set. Quieter numbers like Keep You Beautiful were heard in pin-drop silence – even drinkers at the bar ordered in whispers.

Yet despite all Tindersticks’ considerable powers, the set as a whole didn’t find a rhythm, alternating disorientatingly between the lugubrious and the jaunty. Perhaps the band were put off by the ornate venue. Towards the end of the night Staples muttered, “I always disliked this place, but it’s growing on me.” Actually, scratch that – it’s probably as close as the Tindersticks get to expressions of full-bodied joy.