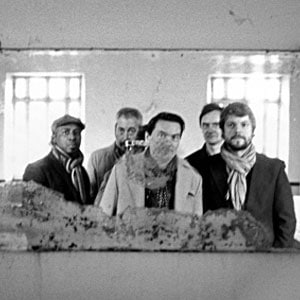 The Strand’s amazing Somerset House on a dusky evening is a cultural oasis in the desert of city living. Tonight it is the setting for one of the most unique and mesmerising performances of fresh talent seen for a long time and all in the form of a supposed support act.

Hawksley’s barely describable vocal paints a picture of Bowie meets Freddie Mercury, gutteral meets falsetto. His lyrical delivery is fast flowing and elegant, encompassing humour, love, cynicism and introspection. “I’m jealous of your cigarette and the pleasure that you get from it,” it is delivered with added throaty growls, barks, full body shudders and the full blown confidence of a born performer, so clearly in his element.

The Wolves consist of a pianist on Roland keyboard, a drummer and a bassist who occasionally adds deliciously harmonious backing vocals to Hawksley’s overwhelmingly confident self expression. Even the tracks which are minus drums and bass and just give us vocal with piano accompaniment are attention stealing. The singer’s occasional surreal and cryptic ad-libbing between tracks, with talk of prayer and angels is also thoroughly thought provoking.

Hawksley Workman is much more than a breath of fresh air, he is a tornado, a whirlwind of positive energy that bowls you over with sheer excitement and intrigue.

For those of us who like some meat with our sonic veg and potatoes, here is the solution. A songwriter and producer as well as a multi-talented musician and born entertainer, his new album (Last Night We Were) The Delicious Wolves is a must for those of us who really appreciate vocal skills and outstanding ability.

There aren’t many nights when the support upstages the headliner but tonight is one of them. Hawksley Workman is a shining star, and we salute him, as darkness and an almost full moon slowly envelop the courtyard of Somerset House.

The stage is set as a 20 piece orchestra of strings are seated. A 2,000 strong army of loyal and appreciative Tindersticks fans are warm and welcoming to the six piece band’s entrance, led by Stuart A Staples armed with obligatory cigarette.

Determined to deliver, Tindersticks are set to ensure that their fans get more than their money’s worth, in the form of a set which consists of 17 songs.

The band are on form, understated and humble as ever and with an air of relaxed ease which unfortunately is slightly overshadowed by the huge orchestral presence. The moving and heart-wrenching sound of cellos, violas and violins in perfect harmony with the legendary seriousness of the songs mean that Stuart’s sullen vocal is almost surplus to requirements. Hardcore Tindersticks fans might disagree, as tonight they are lovingly receptive.

Staples is a perplexing figure. In describing him, the colour grey springs to mind. His grey tailored suit, silvery grey flecked hair and his lack of voice inflection portray that moody grey feel, almost wishy-washy but with an underlying intensity. Ambiguously, the introspective lyrics evoke intrigue at the sense that this is a man who could possibly be in touch with his feelings.

Say Goodbye is sung with guttural passion, giving the idea that this song means more to Staples than we will ever know. Trouble Everyday induces a warm cheer of recognition from the crowd who are mostly motionless.

Varying musical arrangements and instrument swaps amongst the band add some interest to the weary and familiar feel. The prominent sound of delicately plucked steel strings and momentary fiery rhythm guitar licks, underpinned by gentle and reassuring piano and drum brushes, compensate for the occasionally rather woeful energy levels.

Ten years on, Tindersticks are like that comfort blanket or favourite old comfy armchair. There are no life-affirming surprises but there is an admirable amount of thought, emotion and commitment, evident in the band’s unity and performance. Music not necessarily to take us out of our heads, but reflective and deep. There is a hard to define beauty, a separateness and an uncompromising vision which stands tall.

True Tindersticks fans could not fail to be impressed with the length and content of tonight’s performance. For those of us who are appreciative, but require a smaller dose of the morose, the odd CD played at decent volume on a blue day may be more appropriate.