by Tim Lee
published: 25 May 2010 in Live Music Reviews
Tweet 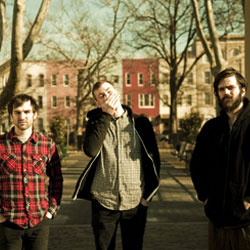 The thing that everybody forgets about Jon Landau’s 1974 proclamation that he “saw Rock ‘n’ Roll’s future and its name is Bruce Springsteen“, is that he used to say that about everyone.

“Where are you off to tonight Jon?” “Oh, I’m just going to have a half of mild and a watch my mate Mick play spoons and sing cover versions of Engelbert Humperdink songs. I’m pretty sure he’s going to be the future or rock and roll.”

Not psychic. Just hedging his bets. But history doesn’t record that. History just records the fact that he was a music journalist who achieved what all music journalists deep down (actually, probably not that deep) want: he said something that is remembered. That persists. Yeah, he put his money where his mouth was and became Springsteen’s manager, but that’s not the point.

Thing is, nowadays, there’s no point in making sweeping, bold statements about bands. Because everyone is doing it. If a review doesn’t say that either the band are the single greatest achievement in human history or are the nadir of 200,000 years (yeah, that’s right: fuck you Creationists) of evolution, then it’s a massive surprise.

As such, we’ve become desensitised to it all. Which means that when it’s really necessary, when you have a genuine, unrepentant desire to make a bold sweeping statement without any agenda, you can’t, because it’s all been said before.

So look. Imagine this is 20 years ago. Imagine you haven’t spent the last decade living in a world where on occasions both The Bravery and The Others have been held up as brilliant. You there? OK, get ready: I have seen Rock ‘n’ Roll’s future, and its name is Titus Andronicus.

This was truly fantastic. A cathartic outpouring of punk energy and nihilistic lyrical intelligence. A band who turn 14+ minute epics about a naval conflict (The Battle Of Hampton Road) into songs for the people. A band who have taken all of the desperate escapism of their New Jersey predecessors and have pushed it forward.

Most impressively of all, a band who get a Shoreditch crowd moshing on a Tuesday night. The songs felt like they were part of something uniting. It felt like a massive piss-up at the end of the world.

There was guitars, there was drums. There was honky-tonk piano, there was violins. There was air punching, lyric screaming. It was the best gig of 2010 so far. The Monitor (their recently released second album) is the best album of 2010. What more is there to say. Oh, guys: do you need a manager?