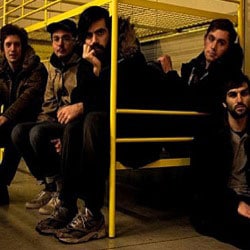 Hello darkness my old friend. Hello sadness my old mucker. Hello getting my testiclesrepeatedly slammed in the door of life, my old brother from another mother.

Hello Titus Andronicus. Who aren’t flush with the joys of Spring. In fact, they’re more holed-upin the depths of wintery discontent, with a mangy dog, three bits of damp firewood and ahalf-eaten Pot Noodle for company.

But it’s a pit of despair which has made a pretty canny album (The Airing Of Grievances) and nowalso made for a pretty canny live show. Particularly as, despite the music coming off like awindow shattering cathartic outpouring for mega depressed shut-ins, they seem quite niceunassuming fellas. Slightly distant, slightly overwhelmed by this standing in a nihilisticpost-modern bunker in darkest Hoxton while people gawk at you lark, but nice nonetheless.

A female companion of mine described them after the show as ‘very male’. Which may be true; thereis something wholly masculine about approaching heartbreak and loss by hitting things very hardand screaming very loud. But when Titus Andronicus hit things very hard, and scream very loud,they’re really very good.

Encapsulated in the closing two songs. Both Titus Andronicus (the self-titled song, rather thanthe band) and a raucous Fear And Loathing In Mawah, NJ manage to adopt thiswonderfully unsteady, time at the bar swing, which achieves something very reminiscent of ThePogues: appearing really sloppy and couldn’t-care-less, while actually playing in an incrediblytight and constructed way.

But there is more here than alcohol stained laments. They introduce a new song from their as yetunrecorded second album as being “about the American civil war”, which hints after a desire to bea bit more cerebral in their output – a sort of iLiKETRAiNS who really like bashing stuff – andthroughout the whole performance these odd little flashes of blue collar Bruce Springsteenian imagerykeeps flashing through.

Things about ‘girls called Mary sittin’ in cars, racing towards amber streetlights’, andthe like. Which helps give proceedings a dose of grittiness and realism that help wash away anywoe-is-me self pitying which might otherwise annoy. Of course it is worth mentioning that theflash becomes more of a burning glare that you shouldn’t stare at for more than a second whenthey play Joset Of Nazareth’s Blues. Which, shall we say, borrows liberally from The PromisedLand by their fellow New Jersey native.

But even if you aren’t down-and-out and overcome with a desire to drink whisky until you can’tlie on the floor without crampons, Titus Andronicus make you wish you were. Which is probably thebest backhanded compliment you can pay them.