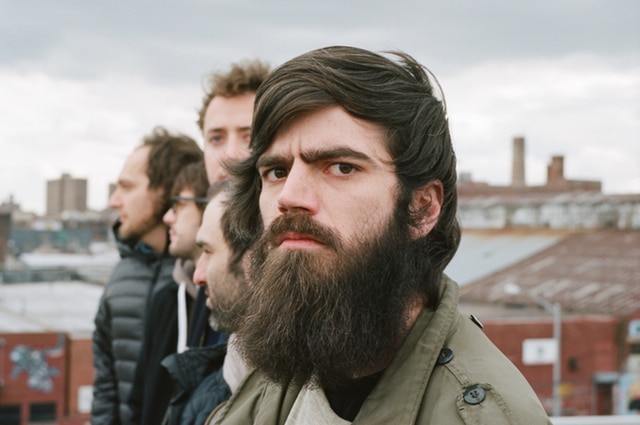 On paper, Titus Andronicus are really incredibly pretentious. Named after a lesser known Shakespeare play, they recently released a ‘rock opera’; a 90 minute, 29-song, triple album called The Most Lamentable Tragedy. The record has been described by frontman Patrick Stickles as “melding elements of philosophy, psychology and science fiction” and he lists Alan Moore’s Miracle Man and Nietzsche’s The Birth Of Tragedy as its inspiration. So the last thing you’d expect is a sweaty, joyful, punk-rock singalong but, against a background of outside swooshes and bangs of fireworks, that’s what the arches of the sold-out Village Underground got.

Stickles starts the show with a rambling address, urging everyone to be nice to each other during the show, telling us that if people want to stand with their arms folded, that’s OK, not everyone wants to leap about. There wasn’t too much toe-tapping though, right from the off the audience throws themselves into it, curling right the way round the corner to the bar area.

With their fourth album, their sound flits between gravelly, world weary tracks, with harmonica overlays to channelling some of the most gratifying punk of the ’70s; chant-along anthems like Your Life Is Over and Titus Andronicus nestle alongside heavier sounds like A More Perfect Union, that give Stickles the opportunity to unleash his animalish, blood curdling roar. Other songs are indulgently long, with guitar solos a plenty, veering on prog-rock with near-ludicrous, dramatic, thrashing noise…and huge titles (No Future Part Two: The Day After No Future and No Future Part Three: Escape From No Future are played back to back, of course).

As a band it’s hard to know how seriously to take them. The reams of rambling, obscure sleeve notes that accompany their latest record and the highbrow references aren’t quite fitting with their music and their attitude. But on the other hand, Stickles has been very open about his personal troubles and breakdown that also played a hand in carving out his most recent work. Are they playing us all, a firm tongue in cheek, brazenly showing off their intellectual side? Or are they being serious? Is this, to Stickles and co’s minds, a master piece to challenge the addled minds of the download generation? Most probably all of the above.

Stickles throws his all into tonight’s show, giving even the more sprawling, exhausting tracks an injection of spikey, celebratory venom. They close with a list of thank yous which ends with “Thank you, United Kingdom, for giving us the greatest rock n roll band of all time…The Rolling Stones,” before launching into Jumpin Jack Flash, Stickles cutting a convincing Mick Jagger, his wiry, topless torso whipping about as his flings his arms around. Hardly the finale of a band of pretentious musos.