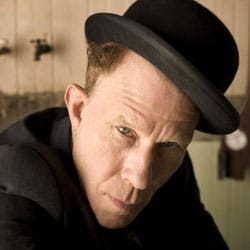 It seemed fitting that Tom Waits, the great vaudeville showman, should bring his circus to town in a big top.

The striped fabric of the tent – dubbed The Ratcellar – loomed large over Dublin’s Phoenix Park on the last night of his three-day stint in Ireland.

Much had been made of the strict anti-touting measures put in place on the Glitter and Doom tour, but the reality was rather less draconian than expected.

Audience members were waved through with only the most cursory of glances at their passports, and a tubby official with a megaphone urged people to bring “as much alcohol as you can carry” in with them. By the time the show started the floor of The Ratcellar was awash with Guiness and strong red wine.

Waits entered in total darkness, ambling slyly onto the stage. After conducting the screaming crowd like a tin-toy bandleader, he struck a pose under the lights and let out a signature hellhound growl. Rumours of his voice being shot to pieces are ill-founded – Waits is pitch-perfect, with a truly astonishing range of roars, moans and soulful bellows at his disposal.

Opening with a mash-up of Lucinda and Ain’t Goin’ Down to the Well, he stamped and clapped in slow motion, kicking up clouds of desert dust from the specially-treated podium on which he stood.

Although Waits drew judiciously on his back catalogue, the show followed the three-part format of his 2007 album Orphans – Brawlers, Bawlers and Bastards. Rowdy numbers (Rain Dogs, Way Down in the Hole, Going Out West) were broken up by a blustery 20-minute session on a baby piano, and scattered throughout were the stand-alone songs that seemed to have sprung from nowhere.

Particularly memorable was a smoochy rendition of I’ll Shoot the Moon, during which Waits turned his back on the audience, wrapped his arms around his waist and canoodled with himself.

Like a bowler-hatted Pied Piper, Waits led his audience here, there and everywhere, often stopping mid-verse for a drink and a chat. “Sorry,” he said, breaking off unexpectedly from Cemetary Polka, “I was dropped on my head as a child.”

But underpinning the whimsy was stagecraft of steel. Every last drop of drama was wrung from the songs by the skilful technical crew and a troupe of pin-sharp musicians, which included Waits’ sons Sullivan and Casey (on sax and drums respectively). “Well trained, aren’t they?” Waits remarked, and they were, keeping up with him even while he was pretending to play catch with his own eyeball.

Bringing the proceedings to a close with a barnstorming singalong of Make It Rain (from 2004’s Real Gone) and a deluge of glitter, Waits vanished with as little ceremony as he had appeared. Fortunately, he was lured back out onto the stage not just once, but twice by the whooping and stamping of 4000 sticky-footed people.

His parting gift was a gleefully twisted version of Hi Ho from the cartoon Snow White. “This doesn’t sound much like Disney, does it?” Waits mused. It didn’t, and nobody present would have had it any other way.