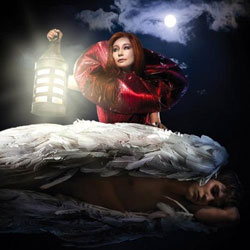 Many members of the audience at Tori Amos’s free gig at the Camden Jazz Caf had queued for hours for a precious wristband to see her play. That might go some way towards explaining the reverential silence, the rapturous applause and the uproarious laughter at every one of Tori’s jokes.

But it also might just be that this is the kind of attention her music – dramatic, even theatrical, and unflinchingly personal – inspires.

The laughter probably wasn’t fake, because she is definitely funny. A story about her father built to a pay-off that went something like, “No, Daddy, it’s just that I took ecstasy and had sex with the devil”. It was off the cuff, not scripted, but it felt prepared, and oh-so-adorably delivered. Everything about the Tori Amos show is professional, from her ultra-polished playing and singing to the little flirtatious tilts of her perfectly coiffed head. It came as a welcome proof of authenticity when she momentarily forgot the words during one song.

Every song benefited from the stripped-back arrangement of voice and piano; on record Amos is often poptastically over-produced. The set was sprinkled with songs from the new Christmas album Midwinter Graces, which on this evidence could be a nice addition to your Sufjan Stevens Christmas album, your Bob Dylan Christmas album, and any others you might have. Is Christmas becoming a genre? Reinterpretations of Silent Night are always, always going to be dangerous territory, but Amos somehow just about pulls it off. She might not be ‘cool’, but she doesn’t care.

Now approximately middle-aged – is 46 still considered middle-aged? – Amos is transforming before our very eyes into a gracefully ageing showgirl, a Liza Minelli or Shirley Bassey with years of touring behind her, a suitcase full of stories and a world-weary professionalism that never cracks under stage lights. Her music has always balanced cruise ship schmaltz and edgy undercurrents. Its genius is its balance of sweet and sour – her voice, like a yodelling fairy, happily mismatched with her ear for darkness.

Although at the beginning of her career she was lampooned for her kooky lyrics – remember Cornflake Girl? – at her best, Amos’s weirdly haunting wordplay is what saves her from becoming too cute for her own good. The best songs of the set – Rattlesnakes, Doughnut Song, Dragon – were perfectly constructed, absorbing and generous. The atmosphere might have been stuffily reverential, the delivery troublingly slick, but the point of consummate charm is that it’s almost impossible to resist.

She finished the set with a regal tour of the front row, clasping the outstretched hands of her disciples like a visiting queen. After explaining she couldn’t face leaving the stage then coming back – “I’m not walking up and down the stairs in these shoes” – she poured herself straight into a two-song encore. Bizarrely, this consisted of a cover of a terrible Chas & Dave song London Girls, followed by her own Pink and Glitter. And then, with a final toss of the head and a few more handshakes, she was off up the stairs and into the night. Say what you will about the lady, but she knows how to put on a show.