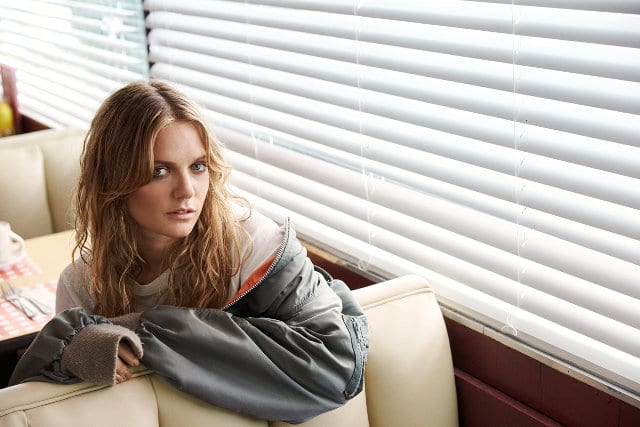 Sexy synth bass fills the air and anticipation tickles the senses when a smattering of drums sends an adrenaline rush through the blacked out room. Dressed in high waisted custom silver trousers decorated with red stripes and the text LADY WOOD across her bum, Swedish chart sensation Tove Lo enters the stage of Shepherd’s Bush Empire and the crowd erupts into screams of appreciation. Matching her sport luxe trousers with fishnets, a cropped black band t-shirt, bed head hair and sneakers, Tove looks every part the modern grunge-pop star with daring sex appeal that her screaming fans have come to adore.

The Stockholm native opens with latest single True Disaster, and the crowd belts along to the dystopian love song. The expletives and dirty tales are sung with her now trademark husky voice, which continues to match album perfection throughout the night; impressive, considering this is the last show of her European tour.

Lady Wood is not just the name of said tour but also the second song up, and it establishes the theme of the night: Sex. That Tove Lo is comfortable with her sexuality and body is no surprise to her many fans, and we’re ever reminded of her refreshing zero-fucks-given attitude as she moves across the LED-lit stage with the confidence of a self-caressing yoga-practising boxing champion. She owns the stage, the audience, the night – and she knows it.

Tove collapses in a heap before firing up hit tune Influence. The crowd adores this warped tale of seduction as much as she loves telling it; at the front of the stage, surrounded by photographers trying to capture her every angle, singing “this is the best place in the world”, it is clear that at this moment and in this place she is telling her truth.

Three songs in, she takes a moment to address the crowd: “This one is for those of you who were with me during the Queen Of The Clouds era,” she says, referring to her first album. Moments, a more straightforward pop ballad, is sexed up with gyrating hips, breast massaging and head banging – all lapped up by the crowd screaming along to the chorus: “On good days I am charming as fuck”.

Not On Drugs from the same album follows, and it’s the only song during which Tove has to ask the audience to participate: “Have you had enough already?” That they have not, and they’re back on their feet for Thousand Miles. Tove dances as if she is about to take you on in a fight and you wouldn’t want to mess with her – which is possibly what her band thought when they agreed to glittery face paint ahead of this final night. They look pretty content with it, and her multi-talented drummer/guitarist joins her in the mesmerising chorus of Vibes, which she tells us she wrote on a boat whilst watching dolphins swim by. A special moment, she says, and so is the performance of this downscaled, rather beautiful tune.

A short interlude is followed by Got Love, on which Tove once again gets to show off her brilliant vocal abilities. And then it’s time for the big one. An extended drum intro teases the audience into ecstasy before Talking Body begins. Tove revels in the sexual tension, and the moments leading up to the final chorus are spent seductively pulling on her top. As the climactic chorus starts – “now if we’re talking bod” – she pulls it up revealing bare breasts, this time without the nipple-covering stickers she’s been sporting at recent red carpet events. If the audience was lapping it up before then they’re completely hers now.

Top back in place, Tove treats us to a rare sombre moment. Playing the keyboard to Imaginary Friend, she tells us how no one used to believe in her and that persistence pays off. It’s nice to see both sides to her – and her tale of staying true to yourself chimes well with her performance this evening.

She disappears for a short break and returns dressed in black latex shorts, a tight net top and flat silver shoes. Standing in front of one single light, beating her chest, she looks every part the dominatrix goddess whilst singing the intro to Keep It Simple. As the tempo speeds up she makes use of the newly gained flexibility that her outfit affords and treats the audience to what is effectively a lap dance, followed by a stage dive. At this point the crowd too has realised that underwear is overrated and a red bra appears on stage, much to Tove’s delight. The seduction is complete and the set is rounded off with headbanging ballad Flashes followed by Cool Girl, another singalong moment for the euphoric crowd.

The encore is massive. When she re-emerges cloaked in a sparkling, see-through jacket, the band joins her at the front of the stage for the raunchiest number yet; What I Want For The Night (feel free to Google the lyrics for an idea of how that, uhm, went down). And then finally the “uh-oh” we’ve all been waiting on erupts from the speakers and the evening climaxes in a perfect rendition of smash hit Habits (Stay High). Chances are the vast majority of the audience remains that way: high on Tove Lo.