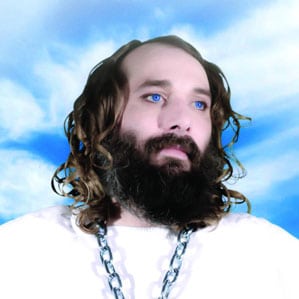 A single stage, sporting an eclectic line-up curated by Gilles Peterson and headlined by Sébastien Tellier, was the focus of the first Traction festival. Set in the newly created Kings Cross space Granary Square, a redeveloped area between St Pancras and Kings Cross Stations and the new Central Saint Martins campus, its relaxed vibe was off to a fine start with the offer of free – and tasty – ice cream creations for early arrivals, alongside a shipping container in which a laser artist did his best to capture punters’ likenesses in neon.

Backed as it was by Eurostar, Traction offered a distinct – and very welcome – focus on European acts, with Peterson the perfect host to introduce his discoveries. Belgium supplied Baloji‘s sunkissed Congolese vibes, while Germany’s Brandt Brauer Frick ensemble won new fans with a virtuoso set of experimentalist, jazz-tinged work that found space enough for Jamie Lidell to saunter on in a guest spot and tinkle the ivories. London too was represented, by Mercury nominee Ghostpoet, who is busy at work on his second album.

Food stalls reflected Eurostar’s focus on European destinations, with a Tyrolean van offering strüdel and schnitzel an example of the refreshing take on festival cuisine. As with most UK festivals, bar provision was inadequate, with queues for the two tiny bars merging in the middle of the site. Credit to the event management team, however; a bottle bar was swiftly established in the wings, cutting the queues to a more manageable size.

Sébastien Tellier has a new album out called My God Is Blue, and the lighting and stage set-up reflected its aesthetics. But the beardy Paris-based genius found space in his late-starting set for his Eurovision entry of 2009, Divine, along with the stupendous minor classic La Ritournelle, the madly daft Sexual Sportswear and – just as he hit curfew – a few hurried piano bars of Roche in a set as memorable for his showmanship and between-songs multilingual banter. There was a tale of how fat his mother is, and a mime about wanting to stage dive but fearing to fall short.

Whether wielding a flying V guitar, sumptuously conjuring chords from his electric piano or just singing into his microphone like some latter-day Lothario, Tellier looked completely at ease with material that is building to a considerable canon of work. Recent single Cochon Ville (bacchanalian and definitely NSFW video below) was a great representation of his genre-hopping pursuit of romance and physicality through melody, rhythm and that certain je ne sais quoi which marks out the best performers from their merely good peers.

With Tellier capping an adventurous bill, and with irritating downpours aside, Traction managed that rare thing – creating something distinct in a landscape saturated with identikit corporate, muddy, Anglophonic festivals. With its cobblestone setting, easy access and relaxed vibe, this charming event could and should evolve into more than a one-off.