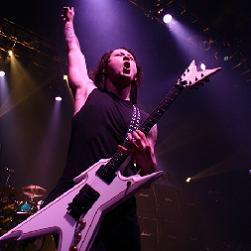 ‘Bang your f**king skulls!’ screams Annihilator legend Jeff Waters as he whines away at light speed on his signature blood red flying V.

As the shredding virtuoso is only too keen to let us know, Annihilator last played the Apollo back in 1991 supporting Judas Priest; which shows both his age and longevity considering he is now supporting an act who are all quite literally half his age.

While age does demand respect, apart from the relic wow factor, banging skulls might be all this icon and his touring bunch of merry men are good for, with new material leaving fans wishing that Sanctitys set had lasted just that little bit longer; Alice in Hell is of course a fine finale number, and leaves the London crowd with a few hundred less brain cells further away from being able to manage anything too mentally taxing the morning after.

Its all smoke and lasers for Triviums classical music booming entrance entrance, with enough white cloud billowing from the stage to give the most clichd 80s hair metal acts a run for their money, and enough fanatical teenager devotees in the crowd to challenge the smash hits scream-ometer. Opener, Entrance of the Conflagulation is stupidly titled but marvellously played, with Matt and Corey providing wind-milling hair dos in sync and showing us just why a band can go from playing The Garage to the Apollo in the space of an album; coz their pretty damn good at what they do.

The wandering sport lights are firmly fixed on the two roaming guitar heroes as they criss cross the stage, beckoning the fans to scream even louder, even resorting to that cheesy hand to ear ‘no really, I cant hear you!’ motion. From then on in, it all feels just a little bit contrived.

The feeling amongst the crowd is for the most part nothing short of adoration, somehow it all feels a little bit choreographed and routine. From the ultra repetitive fuck yeah!s to the tragic You guys are the best crowd of the tour! (not even Linkin Park can get away with that one lads!) heres to hoping that Mr. Heafys charisma increases along with the candles on his subsequent birthday cakes.

That said, there is some jaw dropping talent on stage tonight, Like Light to Flies and Dying in my Arms both incite mayhem amongst the youngsters on the floor. Having spent the last year growing his locks, speedy thrash piece To the Rats sees Matt Heafy edging ever closer to Kirk Hammet territory; all he needs now is a dodgy little goatee.

The Crusade material is fresh enough, but its tracks like Ascendancy and Gunshot to the Head of Trepidation that are by far the highlights of the evenings proceedings. While its hard to believe a band so young can already have classic songs, judging by the adulation from the venues floor, theyd better get used to playing them again, and again and again.