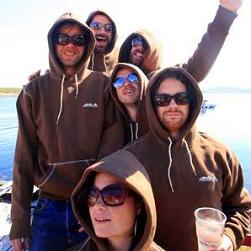 A stock requirement of the gigging experience would seem to be that the audience leaves with a smile on their face – or failing that, at least a sense of satisfaction. Tunng are a band that strive for the first reaction every time – and on this occasion had reached their objective within the first three minutes.

This was in part due to the material from fourth album …And Then We Saw Land, their first with a line-up change that takes them down a new avenue of performance. The charm of their early records remains, but at its side is an aptitude for more powerful pop music that’s not afraid to crank up the guitars at times. Here it meant Mike Lindsay was able to indulge something of a boyhood fantasy, playing rock guitar while wearing sunglasses.

That part only lasted a minute, but it was an indulgence he and the band had earned, having united the audience in a stately rendition of Take. Prior to this the band had explored their new directions in the singalong It Breaks, the gorgeous reverie Don’t Look Down Look Up and the thoughtful October, each telling a subtle story. The group look comfortable on stage, but certainly not complacent – and with simple audience participation tactics such as clapping out a peculiar rhythm, or turning around to face the back, they work the room with apparent ease.

Throughout it’s clear they don’t take themselves remotely seriously, so even when clapping out the unusual, syncopated rhythms, they do so by instinct rather than proving any point. The vocals work really well, with some lovely three part harmonies and unisons, Becky Jacobs offering a new dimension in her elevated role centre stage.

Tunng’s songs are like their titles – quite brief, but to the point. From the new album, Don’t Look Up especially strikes a strong note of resolve, while from Comments Of The Inner Chorus, Woodcat charms with its promise that “we’re in for a lovely time”. Naturally Jenny Again and Bullets get their share of admirers in the encores, and rightly so, but it’s recent single Hustle that really charms, with its wistful vocals and a riff that flies around like a restless butterfly.

Tunng have worked their magic here tonight – and even if you hadn’t seen the gig and were waiting at the bus stop outside, the smiles on punters’ faces would have told their own story.