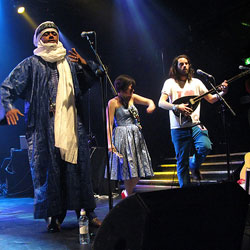 Abdallah Ag Alhousseyni, Eyadou Ag Leche and Said Ag Ayad take to KOKO’s stage as if dressed in readiness for a sandstorm.

Camden, short as it is on dunes, didn’t oblige. But the Tinariwen tourists, here tonight with folky London six-piece Tunng for a unique, if unlikely, collaborative exercise formed after a joint Radio 3 Late Junction session in 2008, wasted no time in demonstrating that their talents extended well beyond the sartorial.

The desert bluesmen opened the evening on their own, in full regalia from the off. Two of their number have guitars (acoustic and electric) and sing while a third sits tapping at what looks like half of a wooden globe. Tunng’s electronic gizmos are on stage, but their owners are not.

The beguiling, trancey acoustica blown in from the Sahara proves instantly hypnotic, with meditative song structures making for a psychedelic feel. When Tunng do take to the stage, all under tracksuit hoods, the concern is that they can only go downhill from here.

Of course the opposite proves to be true as Tunng’s Mike Lindsay announces that the bands will play each other’s music. From desert blues to trippy folk the two tribes meet somewhere around a campfire for a reggae-tinged atmosphere from then on. Tinariwen’s musical open spaces, stunningly recorded on their last album Aman Iman, are subtly filled in by atmospheric contributions from their hosts while Tunng’s music, ordinarily wispy, suddenly packs a powerful punch with the addition of Abdallah’s dominant voice.

It doesn’t always work. Tunng’s more electronic moments occasionally misfire, more because of sound levels causing machines to swamp wooden instruments, but as the set progresses and the bands become ever more interlocked such misfires pale into insignificance, leaving the only real gripe as the Touareg tribesmen not being allowed to play more on their own. Perhaps another tour, with the full contingent, will see to that.

Lindsay, working his way through an array of instruments that includes what looks like some kind of lyre at one point, swaps his banjo for electric guitar and feels confident enough for a few rock god shapes, indulging in the least expected Van Halen face off in the history of live music. He gets rapturous applause, not least from a delighted Said. It’s plain that the two acts have connected, musically and personally, though exactly how and why remains as mysterious as Abdallah’s lyrics.

Towards the end of the set Abdallah sets aside his instruments for a spot of dancing the likes of which would readily put Shirley Bassey to shame. Tunng’s diminuitive backing vocalist Becky Jacobs shimmies about with him as the two bands’ other members egg them on. When it’s over, and with no promise of an accompanying album as yet, it’s a bittersweet end to a hugely memorable evening.