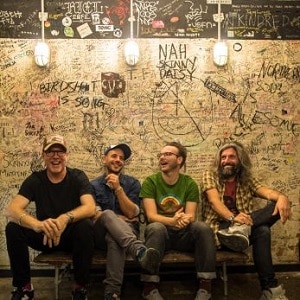 It’s a cold Sunday evening in early November. There’s a damp post-downpour atmosphere on Oxford Street and SAD appears to be setting in. It’s the sort of time when you’d much rather be at home with a mug of tea and a DVD than to have to go to a gig. Thankfully Turin Brakes‘ headline set was well worth trudging through the dark for.

The rather bizarre choice of venue was the London Palladium, currently home to Tommy Steele in Scrooge The Musical. Immediately the atmosphere is very different from your run of the mill gig. Instead of pierced students handing out flyers there’s a phalanx of theatre ushers smartly decked and more than willing to guide you to your numbered seat. In fact the only indication to show I was there for a gig was in the tiny T-Shirt stall and the fact that a beer cost 4.

Luckily the rather stuffy atmosphere did not manage to get in the way of what was a great gig. Head duo Gale and Olly provided a captivating performance ably assisted by a backing band decked out rather oddly in Beatles fab gear circa From Me To You.

Turin Brakes clearly deserve more recognition for their talent. The mega-fame that seems to elude them must be frustrating; hence this tour had ditched the rock in favour of a back-to-basics acoustic feel. The band freely admits that this has invigorated them and the results clearly shone though in an inspired performance.

They performed a vast selection of songs from their back catalogue, including previews of new material written on the road and tracks available exclusively on the tour. As you’d expect, singles like Mind Over Money and Fishing For A Dream naturally formed highlights. However, the new or more obscure songs such as Future Boy provided many a moving moment.

What struck me above all about this gig was the amount of fun everyone seemed to be having on stage. Eventually we were persuaded to leave the shackles of our theatre seats behind and stand in the aisles for the rousing final half of the performance. The undeniable highlight came from an improvised jam slowly morphing into Painkiller via Survivor‘s Eye Of The Tiger.

This was that last night of their tour and the musicians were constantly egging each other on to the audiences delight: “Oh go on. We’ll do just one more!” was a regular cry. Home movies of the guys on tour provided the backdrop and was a great reminder on how far they’ve come.

The band seemed evidently pleased with their efforts, returning for two meaty encores. The gig is now available as a download from their website if you fancy checking it out. This was one of the best gigs I’ve seen in a while so I’d definitely recommend it.

Support was ably provided by Irish singer/songwriter Fionn Regan who gave an assured performance despite few of us having heard of him. His Bob Dylan/Donovan-esque musings were a great foil for the headline act. Regan is definitely one to watch in the future. If not for his talent then for the fact that he has one of the scariest, most fascinating looking drummers since Animal from the Muppets.

As soon as the evening was over it was back out into the cold and damp. But thanks to the evening’s set it felt that little bit warmer. There’ll certainly be more to come as the brakes don’t look like they’ll be applied just yet.