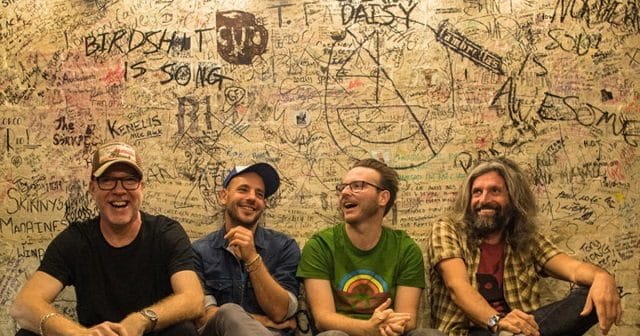 It’s fair to say that Turin Brakes are never going to be a band that radically changes the world of music. They’re not a band of big, polemical statements or headline-grabbing actions, preferring to quietly concentrate on what they know and do best – polished, accessible guitar-pop that celebrates the smaller, lesser proclaimed aspects of music. Their music is all about the personal connections, the lyrics that resonate, the reactivation of memories and the revelling in the new that can be traced back to the old.

These traits were all very much in evidence during tonight’s show at the Palladium. Latest album Invisible Storm builds on the success of predecessor Lost Property and they open with a trio of tracks from it. On the surface, Would You Be Mine is enjoyably undemanding and radio-friendly material, although digging a little deeper finds them addressing some of the concerning aspects of global politics. In typical Turin Brakes style however, it never gets too heavy, powered along by some brisk playing.

Wait and Lost In The Woods both have similar liberated, free-flowing melodies while Life Forms is ridiculously upbeat, reducing human existence to its most simple, egalitarian terms. The title track from Invisible Storm strikes a more windswept note, possessing a chorus that seemingly wouldn’t be out of place in stadiums. Everything All At Once is another new track given an airing tonight, featuring some agile guitar playing.

They’ve long passed the point of even remotely wanting to fit into some wider musical trend. They’ve built up a loyal following over the 19 years they’ve been going, and they’re keen to give their followers what they want. That means we also get a generous serving of euphoric moments from their back catalogue.

Emergency 72 sounds bulked up tonight and, ahead of Future Boy, it’s revealed that guitarist Gale Paridjanian’s children are in the crowd tonight. “Daddy’s pretty cool,” remarks frontman Olly Knights to laughter. State Of Things still cuts like a knife, tapping into a deep well of feeling. It also confirms how Knights has a hugely underrated voice, full of deep-buried emotion and restrained intensity.

Restraint isn’t a word that can be applied to bassist Eddie Myer, however. He parades his showman tendencies early on and lives out his rockstar fantasies throughout, often in comic and overblown style. Later, ahead of a joyous version of Painkiller, he reminds us how second album Ether Song is now 15 years old: “It’s stopped talking to us and is now going to go vegan and get a tattoo.” Fishing For A Dream follows immediately after, arguably their pop peak (and also showing how Olly and Gale still remind us, in a strange parallel universe kind of way, of a musical version of Adam & Joe).

Black Rain is heavier and more widescreen – they may have started out many years ago as part of the ill-conceived ‘new acoustic movement’ but this shows that in the intervening years they’ve also developed a full-on rock mode. It’s still Underdog that remains their beloved calling card however, tonight prompting outbreaks of hugging among the crowd. It shows Turin Brakes to be as popular as ever, and that those connections in no danger of being broken.