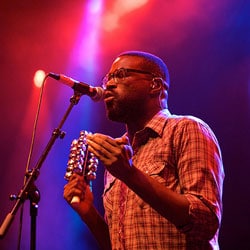 Showcasing their recent album Dear Science, Brooklyn innovators TV On The Radio demonstrated why they’re one of the ‘bands of the moment’ with a brilliant set mixing in their new with some of their old.

Straight in with old fan favourite Young Liars, tonight they’re electric. And getting modern classic Wolf Like Me out of the way early in the set isn’t a problem for a band who now have a back catalogue strong and full enough to afford them the privilege of leaving out some great songs from the set.

Their blend of dirty rock and uncontrived, raw funk has always been about rhythm and basslines and playfulness, and while in the past their experimentalism has proven difficult at times, their focus has shifted towards a more commercial sound. But they always find an edge to the most commercial of melodies, and they always offer a welcome darkness to offset the light. Well represented tonight by the likes of the stripped back funk of The Golden Age and the unadulterated pogo-pop of Shout Me Out, Dear Science has proven a great album and we can look forward to it featuring on a lot of best-of-year lists.

At the front of the stage the two leads Tunde Adebimpe and Kyp Malone couldn’t have been more different. Adebimpe, providing the bulk of the vocals, puts a huge amount of energy into his performance, covering a great deal of distance around the stage and leaving sweat puddles in his wake as proof. Meanwhile Malone with his falsetto style moves little. But they complement each other well, and in the current music scene both seem different and unique in their own different and unique ways.

The main set seemed over far too soon, and a three-song encore really was the least they could do, but it was all worth it when the night ended with a roaring performance of Staring At The Sun. A magical moment as the venue became trapped in a whirlpool of sound which made this song better than it ever sounded on record. Staring At The Sun was magnificent tonight.

There may have been a few sound issues and there really was minimal interaction with the crowd, but tonight TV On The Radio demonstrated that they really are one of the best bands in the world right now. And they’re still getting better.