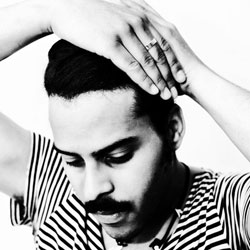 This is an upsidedown review, but there’s no doubt that tonight’s gig was scheduled that way. And by reviewing it upside down we’re turning back up the right way, yeah? Because this was a strange night where the best act went first and the two acts at the top of the bill were nowhere near in quality.

Headliners Teengirl Fantasy should’ve gone first with their brand of chill out electronics. The two guys with their keyboards and graphics might be able to draw a listener in with their ambient vibes, but this is the type of music that’s fine at five in the morning after a heavy night out. Headlining here though? Really?

In fairness they were better than Kitten who came before them. An indie pop band trotting out every clich imaginable is the last thing any of us need. Whether it’s front-girl Chloe beginning with covering Bizarre Love Triangle or clambering over every corner of the stage, she wanted to be a rock star so hard and she tried too hard all of the time. Wishing she was Karen O, it just didn’t work because ultimately the melodies and the tunes were boring and unoriginal.

But first up were Twin Shadow. Essentially the project of Brooklyn boy George Lewis Jr, tonight he was the frontman of a four-piece. With first album Forget about to be released on the 4AD label (which by now we should all know to blindly trust), he showcased a few of the tracks.

Somehow straddling both disco and the purest of guitar-based songwriting, his band touches hard on both emotional and enjoyment levels. Opening up to a fairly empty room with Shooting Holes, it’s immediately apparent that however good you think Lewis Jr’s songs sound on record, they’re better in person, as his voice turns out to be surprisingly deep and strong. The band complete with a bass guitarist, a keyboard player and a drummer, these songs are supreme. Within a couple of tracks, the room is packed.

Slow is a predictable highlight, Lewis Jr building up towards a fraught chorus, ending with a repeated roar of “I don’t wanna be, believe in love”. Meanwhile, Castles In The Snow, a tale of obsessive love on record, is turned into a fierce, rockier track tonight as his lyrics, backed by some tribal drumming, spiral out of control.

By the time we get to Forget, the seventh and final track of the set, those who aren’t expecting such greatness are left with their hearts in mouths. And they don’t want the band to leave. Such aggressive baying for a first-on-the-bill act to remain has rarely been seen. But Twin Shadow are something special, and why they were on first is a mystery.

Brooklyn has clearly not yet exhausted its supply of talent. Twin Shadow has turned up to the party late and dishevelled but proves that 4AD have come through again. Once his excellent debut album has sunk in, the next time he’s in the UK, he’ll be headlining a much more appropriate gig.