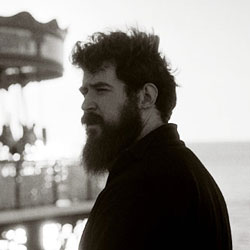 The Barbican’s second Twisted Christmas evening aimed to relieve us all of the tedium of annual revelry by providing darker, earthier entertainment.

It is not exactly a concert, nor cabaret, comedy, art show or theatre but a mix of all the above and certainly a different take on the seasonal celebrations. Unfortunately it underwhelmed with a lack of twists and little out of the ordinary.

We are all familiar with icky, Yuletide sentiment that pervades nostalgic modern culture; Bing Crosby, chestnuts roasting on open fires, love everywhere, crisp white snowy mornings and the like. However we are also equally saturated with mean-spirited comics on the telly, the satirical and darker edge sharpened by festive frustration the anti-chrimbo brigade. Somewhere within this the Barbican has tried to find a new niche. But after two thousand years and a plethora of pantos, prattling pundits, pushy parents and complementary performances, how could Twisted really provide distinction?

David Coulter, creator and musical director of the project, was modest about it. He realised that Christmas has been cheapened and wished to produce something more human and heartfelt. To present this service his eclectic group of performers made up a programme to simply express their feelings for the special day.

This year Richard Hawley topped the musical bill, and we had a visual feast from House Of Fairytales as they screened work created live and in time to the music using a stage-wide projection. Jeremy Hardy, Radio 4 regular and comedian, was compere. His acrid humour, political persuasions and appropriately topical jokes on modern government, gym going and Jewish nail factories tows the Twisted line without playing it too safe.

Josephine Foster was the first musical guest. Her voice warbled and blended with the sound of the musical saw so as to be barely comprehensible. The projections featured Ghandi, Mother Teresa, Martin Luther King and John Lennon wearing Christmassy novelty hats as a welcome distraction.

The Sense Of Sound Singers, performing their own compositions, were a fantastic alternative to your usual Christmas chorus. They were funky, dynamic and produced rich rounds and harmonies – it was a shame we didn’t get to see more of them, or have them on stage throughout.

The first real hint at dark sensibility came from singer-songwriter Ed Harcourt. He performed a song specially written for the night entitled The Devil Came Down The Chimney. The projected illustrations perfectly matched the sinister lyric with a giant blasting an idyllic, rustic scene with laser eyes. He closed his brief set with the R&B standard Merry Christmas Baby.

A handful of chaps took their turns: The Story Pirates, a hit and miss, hipstery, improvised comedy duo pranced around the auditorium and invented a story about the worship of penguins. Alistair Roberts gave a druid rendition of the 12 Days Of Christmas while reindeers were painted on London Postcards. Simon Fisher Turner, dressed as a priest, sucked on some helium for traditional carols.

Two great ladies made respective highlight performances. Polly Scattergood performed a marvellous cover of Walking In The Air, somehow making it sound fresh and mysterious all over again. Eliza Carthy chose to cover Chris de Burgh‘s A Spaceman Came Travelling and her interpretation stayed loyal to the original. Her voice was perfectly suited being powerful, subtle and sophisticated. Her own a cappella work spoke of the bad things that happen to people who don’t give gifts and was entertaining enough to stand alone, however, a rather menacing character projected on the screens behind her destroyed mince pies and blew glitter onto his Vaseline-coated face and was consequently frustratingly distracting.

The wide variety in performances allowed for a variety of levels of enjoyment, although much kudos goes to the visual arts ensemble backstage. The night was strung together somewhat haphazardly, if charmingly, but did not seem to meet either the brief or promise of a true counter-Christmas smorgasbord.