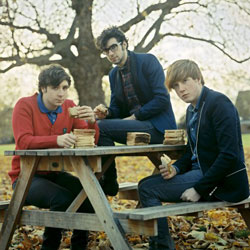 There are few pleasures greater in life than, with a smug look of indifference, being able to tell slow-off-the-mark friends that you saw that band first. Judging by tonight’s crowd, there are going to be a few smug faces come September because, just days before their show at the humble Hoxton Square Bar & Kitchen, Two Door Cinema Club announced a whopping national tour in the autumn that’s set to take in the likes of Shepherd’s Bush Empire, Manchester Academy and Leeds Met Uni.

That’s not to say there’s no interest in them already – their album Tourist History was released just over a week ago but, thanks in no small part to their high ranking in the BBC’s Sound Of 2010 list, tonight’s more than a sell out. “We’re ridiculously over-sold,” moaned a barman, retrieving more glasses to take from the bar to the venue. It’s packed to the rafters, and by the time the band takes to the stage, it’s hard to tell if the human wall of clammy t-shirts are drenched in sweat or spilt beer… or both.

But that’s quickly forgotten as the Northern Irish band knuckle down to business, and after welcoming their crowd to “St Patrick’s plus one” they reel out radio favourite Undercover Martin as the second song of their set. They look amazed at the turn-out. “Last time we were here it was full of industry wankers,” quips singer Alex Trimble, before being corrected by a more nervous guitarist Sam Halliday “Errrr, they weren’t all wankers…”

It was one of those “wankers” who, last year, signed them up to Kitsun. Ever since, they’ve been promising big things with their playful, electro guitar sound. They’ve cherry picked key sounds from wave makers of the recent past, and the likes of Good Books, Postal Service and Foals were all clearly regulars on the Two Door Cinema Club record player while they were writing their first songs. Other nods go out to Vampire Weekend whose carnival afro-pop beats are smattered all over Something Good Can Work.

Rather tellingly it’s free download Costume Party that gets the first big reaction, but the set then begins to lose its way and, despite them going all out and playing with reckless energy as though their lives depended on it, the mid-section of the set blurs into one. With the singles they’ve found an exciting sound – it might be nothing new, yet they’re doing it well – but there’s a hefty handful of fillers on Tourist History, and tonight it shows.

As thumb-twiddling mode sets in, they leave the stage and bound through the emergency exit where they wait, mopping up their sweat for 30 seconds, before bounding back on stage for a short encore. Their hour long set’s rounded off by saving Tourist History’s best track for last. The Futureheads-esque “ah-oh ah-ah-oh”s of I Can Talk whip the crowd into a frenzy, but it all has an uncomfortable familiarity. Despite the tender age of the album it already feels tired. The simple fact is their best tracks have been plugged to death, and their second album already feels a long time coming. September, too, feels a way off yet, and you have to wonder if any of tonight’s crowd are going to have the patience to hang around for the trip to Shepherd’s Bush.