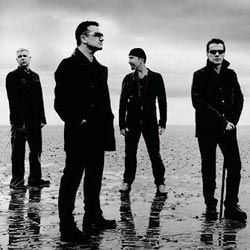 We’re constantly being told we’re in more austere times, with less flamboyancy and a more stripped-down, back to basics approach to life. Obviously, nobody thought to tell U2 this.

For ‘The Claw’, U2’s revolutionary new stage set, is impossibly ambitious, hugely spectacular and a mark of genius in design terms. Towering high above the Don Valley Stadium, it resembles a sleek spaceship with the Empire State Building’s radio tower in its grip.

Hidden within The Claw is the sound system, thus banishing the need for massive speaker stacks on either side of the stadium, which make the stadium’s acoustics sound stunning.

There’s also a huge screen wrapping itself round The Claw, and a stage which revolves 360 degrees, allowing everyone in the stadium a decent view. It’s certainly the most impressive stage design that this reviewer has ever seen.

It’s easy to think that a band as down to earth as Elbow may look slightly incongruous under such a set-up – surprisingly though, Guy Garvey seems to be turning into something of a stadium star, using every inch of the stage and even conducting the audience in a singalong at one point.

A truncated setlist leaned heavily on the Mercury-winning The Seldom Seen Kid, ending with a celebratory version of One Day Like This. “I’m going to buy their album, first thing tomorrow” a girl commented. Yet another deserved fan for Bury’s finest, then.

After a nice touch of a string of songs exclusively from Sheffield artists, a countdown began, smoke started to rise from The Claw, and the unmistakable tones of David Bowie‘s Space Oddity rang out. And then suddenly the eternally youthful figure of Larry Mullen Jr was behind his drumkit, and the entire stadium seemed to be bouncing as one.

The other three members of the band soon appeared, and it’s impressive to note how much excitement a quartet of men now in their 50s can still generate. Even kicking off with the lesser known album track Breathe doesn’t seem to diminish the adrenaline rush swooping around the stadium.

Bono is a man much criticised, but it’s hard to fault his appeal as a rock star. He knows how to keep an audience in the palm of his hand, utilizing every inch of the brilliant stage design, sprinting onto a revolving bridge and meandering down an outer walkway, brushing hands with his adoring public.

Get On Your Boots has an added punch and vibrancy to it live that seemed to be missing on record, and old favourites such as Vertigo and Elevation are pretty much the epitome of the perfect stadium rock song. And, no matter what your feelings about U2, the sheer power of thousands of people singing along to Beautiful Day cannot be denied.

There was also a nice, acoustic duet between Bono and The Edge on Stuck In A Moment and a superb, disco-fied rendition of I’ll Go Crazy If I Don’t Go Crazy Tonight, featuring the slightly disturbing image of Bono, The Edge, Adam and Larry looming down on the screen above us, nodding intently along to the music. Even relatively unknown tracks such as the recent Unknown Caller are sung along to with gusto.

Even the preaching and politicking, that aspect of U2 that’s so off-putting to so many, seemed to be kept to a minimum. The stage was bathed in green in tribute to Iranian pro-democracy protestors during Sunday Bloody Sunday while Walk On was dedicated to the imprisoned Burmese leader, Aung San Sui Kyi, the stage surrounded by people wearing masks of her face. It was an impressive, and somewhat moving, piece of theatre – and why should Bono be resented for drawing attention to such causes? If just one person in the stadium is intrigued enough to read up about Aung San Sui Kyi’s plight, then so much the better.

The encore was introduced by the cheery, giggling figure of Desmond Tutu on the video screen before the unmistakable chords of One rang out, still as affecting and poignant 20 years on. An intense Ultraviolet (Light My Way) followed, before Mysterious Ways provided yet another singalong, ‘hands in the air’ moment.

Like all great bands though, they save the best till (nearly) the last, with a stunning With Or Without You ringing out across the clear Sheffield sky. In fact, perhaps the only mis-step of the whole night was following it with Moment Of Surrender. It’s a fine song, but the power and majesty of With Or Without You would have made for a more fitting set closer.

Yet that’s just nitpicking. For all the stick they receive, the legitimate environmental concerns about The Claw’s carbon footprint and despite Bono’s undoubted Messiah complex, U2 remain one of the finest live rock acts you’re ever likely to experience.