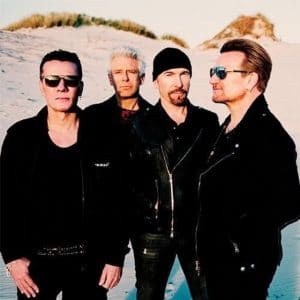 Tony Blair should be worried. His new best friend Bono has a messiah complex too. But judging from the U2 star’s reception at Twickenham on Saturday night, Bono’s apostles would win any battle for global domination. This explains the cheering multitude as the front man harangued them about poverty, war, religion and, of course, Africa.

As the night progressed the sermons became more heartfelt and, quite frankly, bizarre. I mean did I hear his intro to Running to Stand Still right? “The next song is dedicated to British Service men and women wherever they are.” Did the King of Peace Politik and Co-Saviour of Africa really dedicate it to Her Maj’s Forces Overseas? The irony was lost on the audience who would probably have whooped with joy if Osama bin Laden had been brought out to meet them.

Bono is living proof that millionaire pop, sorry Rock, stars should leave the politics alone, unless they have something less simplistic and more intelligent to say than “text this number to tell Tony Blair and Gordon Brown what you think about poverty”. It was crowd-pleasing homily unlikely to challenge an audience willing and able to fork out 85 to see their favourite band.

The politics is a distraction from the real business of U2, which is live rock with the rush of a downward ride on a rollercoaster. I first saw U2 at Leeds University nearly 20 years ago, one of their last gigs in a small venue. It was a blinder. They were two hours late. We were tired, bored and not a little pissed off. Those feelings evaporated within a minute of Bono swaggering on stage to blast out I Will Follow. We would have followed, even up the precarious amps he clambered up.

At Twickenham U2 showed they have lost none of the sturm unt drang that burned into my memory back then, despite being in a venue 50 times bigger. They have seized the crown of Greatest Rock and Roll Band In The World from those crusty old geezers The Rolling Stones.

The set kicked off with Vertigo, a near-perfect rock and roll anthem. But this was no lazy run through of their latest album. This was U2’s Greatest Hits, all of them. I Will Follow and The Electric Co sprang next from the trap in a set rounded off by She Moves In Mysterious Ways and, once more with style, Vertigo. Every album from Boy to How To Dismantle An Atomic Bomb was plundered, a reminder that Bono’s voice has lost none of its power or master axeman The Edge his virtuosity.

A pared down stage show underlined the musical strength – though a sound system that sacrificed either vocals or Adam Clayton’s driving bass threatened to undermine. The high points were when the band walked across the crowd on elevated walkways. As Bono strutted above the throng like Jesus walking on water during I Still Haven’t Found What I Am Looking For this rock messiah could have taken us all with him.