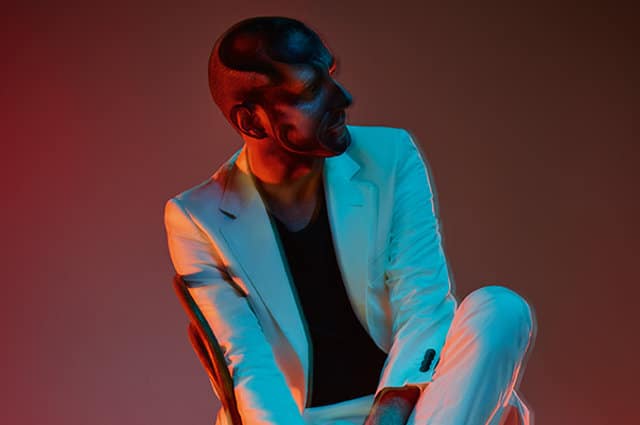 Billed as ‘a unique audio visual show’, the main impetus for the screen projections on offer at UNKLE:REDUX tonight are the Stanley Kubrick tribute exhibition (also at Somerset House) curated by long-time admirer and UNKLE lynchpin James Lavelle himself. This is an intriguing prospect, especially after the success of director/composer John Carpenter’s recent spate of well-received live shows. Carpenter’s shows work because the music and film images are so obviously and inextricably connected, packing a pop culture whammy that is hugely enjoyable, if not terribly subtle.

The combination of UNKLE and Kubrick, however, has huge question marks hanging over it. Influence from film-maker to musician doesn’t necessarily mean that images and music automatically go together, as becomes plain tonight at several points (Rabbit In The Headlights gets a blood dripping The Shining hotel makeover, for no particularly discernible reason).

The centerpiece for this is a new four-screen work created especially for the exhibition: a Kubrick-esque installation backing the old Psyence Fiction song Lonely Days (which stars Joanna Lumley, no less). Kubrick was pegged to make his own video back in 1999, but then inconveniently died, meaning that it took 17 years for this pastiche of his ideas (think: corridors) to get made in his absence. While this makes a lot of sense in the context of the exhibition, the simplified version projected on the screen ‘reduxes’ it to what is almost always a terrible idea in live shows: projecting your music videos behind the performers.

A rumble down the corridors of The Shining works much better during Reign, but things are most effective when the visuals are kept looser and less figurative, as in a riff on the famous space flight from 2001: A Space Odyssey. Overall, there is neither a sense of cohesion nor progression to the visuals, which are in any case projected far too small at the back of the stage to have much impact on the crowd. It does, of course, take a formidable amount of vision and expertise to make such grand, cohesive live projections work (Kraftwerk and Massive Attack being perhaps the best current examples), but if you haven’t got the chops, don’t overstate the importance of your live audiovisual powers.

The other big problem tonight is the revolving door dynamic applied to the guest singers, who largely have to fill the boots of famous collaborators on record. The better known ones (Liela Moss from Duke Spirit and Eska, by far the strongest presence tonight) do serviceable jobs but their arrivals aren’t staged to actually mean something: nobody is announced or introduced, creating problems for the less high profile performers who struggle to make an impression on the crowd. This is a would-be live spectacle desperately in need of a ring-master, and, evidently, James Lavelle is not the man for the job. He admits to the audience that he’s not much of a talker, and his banter is rather awkward. This is fair enough, but we need a much stronger presence at the helm to make all the elements presented tonight come together.