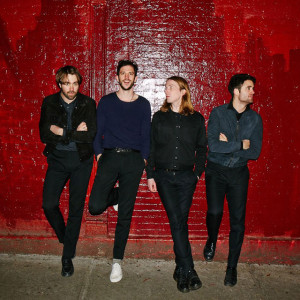 The Vaccines are pretty big business these days. The west London quartet have built up an impressive international following on the back of two platinum-selling albums and a gruelling touring schedule since they formed in 2010. Much touted as ‘British indie guitar music saviours’, their ironically titled debut What Did You Expect From The Vaccines? was a decent effort but was never going to live up to the hype, while the sophomore Come Of Age did what it said on the tin with a stronger, more mature set of songs. Last year was mainly quiet on the live front, but now they are back performing with their new album English Graffiti due out late next month.

The band has chosen to promote it by returning to their sweaty roots with a short, sell-out tour of smaller UK venues – quite a comedown from headlining the O2 Arena in 2013, but they will be playing the festivals in the summer – finishing at Electric Brixton. Hitting the stage bang on time, they receive a rapturous reception from a packed crowd who are more than ready to get rocking. More or less on home turf, this is definitely preaching to the converted, with the sing-alongs and hand-clapping starting early and plenty of action in the mosh pit.

It’s a chance for the band to road test some of the tracks from the new album, including the unashamedly poppy single Handsome (a return to their early, 1950s rock’n’roll-inspired style) and The Black Keys-like glam-stomping follow-up Dream Lover, plus the spikily empowered 20/20 and most interestingly the slow-burning, sultry Want You So Bad. By the sound of it, English Graffiti will be The Vaccines’ most varied album so far.

Not surprisingly though it is the most familiar songs like brashly confident opener Teenage Icon, Ramones-style pop-punk Wreckin’ Bar (Rra Ra Ra) and If You Wanna with its catchy chorus that get the biggest response from the crowd, who seem to know all the words. There’s a spirited account of Post Break-Up Sex and Melody Calling comes across sweetly, while front man Justin Young’s solo acoustic version of No Hope – not much more than a Bob Dylan pastiche – performed as an encore is received more indulgently than it deserves.

Backed by a fifth, multi-instrumentalist musician, not to mention a snazzy light and projection design, the all-black-wearing band, with their matching white guitars, put on an entertaining, slick show that pushes all the right buttons for the adoring fans. Sometimes the stage control may seem to border on the mechanical – you wonder if Young and guitarist Freddie Cowan always end up on their backs during the last song, or if the microphone is tossed into the audience at the same point each night – but their professionalism cannot be denied. Always commercially aware, edgy unpredictability has never been The Vaccines’ thing. They left the garage very early on, and a 1500-capacity venue is now small beer for them, so they will undoubtedly be back in the arenas soon.