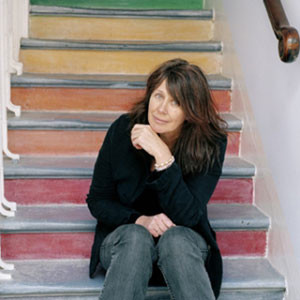 It is difficult, however, to apply the nu-folk label to Juana Molina. This brilliant 44-year-old from Buenos Aires, once a successful comedienne in Argentina, might just rival Joanna Newsom as the most exciting and original female talent to emerge since Björk‘s thunderous entrance to the world.

But whereas Newsom certainly does tread a folkish path with her Appalachian leanings and psych tendencies, Juana is more problematic to pin down. Using a technique I’ve since discovered is termed in the business as ‘live loops’, she records herself on various instruments, building track after track to a multi-textured crescendo over which she makes chirps, chirrups, and other unintelligible noises (and its not Spanish, a language that achieves an elevated loveliness when she does sing in her native tongue). This lady’s music is genuinely new, and in concert it is fascinating to watch her construct it (because that is what she does – she is a musical architect) in front of you.

Vashti Bunyan is a fairly regular fixture on the UK live circuit these days – something she couldn’t have dreamt of during her 35 years away from music. As her motherly voice wrapped itself around her dreamy and sad lullabies, the audience as a whole seemed to noticeably close its eyes and drift off into the pastoral idyll Vashti’s music evokes.

But then it had to return and frown at the inadequate volume. You see, Vashti suffers in a live setting. So soft is her voice that it barely registers when it is just she and her guitar, so it was inevitable that she would be completely drowned out when a 7-piece band surrounded her.

But her songs remain magnificent. Even Diamond Day is intact after the terrorising it received from T-Mobile, who used it to advertise on TV. Lately and Wayward, from 2005’s comeback album, Lookaftering, were nice and no more, but 1966’s Winter Is Blue, probably the best song she ever wrote, benefits from an excellent new arrangement with Vetiver, Adem and others giving it a larger sound, yet detracting none from its painfully fragile beauty.

Adem has never been a favourite of mine. His plodding and irritating style mistakes slowness and length for emotional weight. Tonight, however, he seemed improved. Everything You Need was enhanced by Vetiver, Vashti and Juana, while he proved himself an accomplished multi-instrumentalist throughout including a rendition of the children’s story Little Red Fox, which he played admirably well on a set of six bells. He seems, if nothing else, an endlessly curious and interested musician, so deserves his place amongst this vista of talent. He also added commendable ukulele to Vetiver’s Idle Ties.

Aah, Vetiver. One of the best bands in the world right now, the missing link between Gram Parsons and The Band, between Neil Young and Ryan Adams. When reviewing them last year, I stupidly suggested their songwriting wasn’t quite as hot a proposition as it might be. This is pure bollocks, as is proven by To Find Me Gone, one of the finest albums of 2006.

They managed to get in a few of their own songs tonight, including Oh Papa, a slow-burning classic best enjoyed with incense. Maureen proves their capacity for introspective balladry, and after these numbers it seemed reasonable to want the other three acts to bugger off and let Vetiver do their thing. Their songs are drenched in the purity and soulfulness of California circa 1969, which when combined with Vashti’s Arcadia, Juana’s electro-latin hybrid and Adem’s enthusiasm, ensures this tour will find friends everywhere.