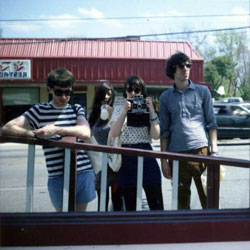 If the worst that you can say about a band is that they look like a bit like Ride and sound a bit like Deerhunter performing the hits of the Velvet Underground, is that really so awful? Tonight’s support act Echo Lake grow ever more accessible and they must surely be ready to headline shows of their own. Singer Linda Jarvis, whilst somewhat nervous, is still an entrancing presence and the rest of the band provide intuiative backing for her arresting melodies.

You can’t help but be aware of tonight’s headliners Veronica Falls as their cherubic little faces are all over the music press currently, and the Lexington is somewhat rammed with eager fans. There’s the obligatory old school indie brigade, all NHS glasses, charity shop knitwear and faded army surplus bags, but there’s another revelatory element to the crowd. Dads, and what look like grandads too. Almost a third of the audience seem to be over the age of 50. That either says something for the inherent loveliness and broad appeal of the four band members, or else they’ve just got very supportive families.

Veronica Falls start off well, launching into the first song they ever wrote, the wonderful Found Love In A Graveyard, and it becomes clear why there’s so much interest in them. They have a knack for writing affecting melodies with morbid themes and punchy drumbeats. The real backbone of the group appears to be drummer Patrick Doyle. A growing legend within the Scottish music scene for his role in the now defunct John Peel favourites The Royal We, he’s fast becoming twee aristocracy. His deceptively simple rolls and kicks help push the group from fey moaners to aggressive balladeers.

Maybe it’s the whole two-boy-two-girl dynamic but there’s a definite The Mamas & The Papas thing going on. They both harmonise and underplay each other at various stages and it’s a joy to watch. Underneath their fringes lead guitarists Roxanne Clifford and James Hoare are all smiles, relishing in the approval of a feisty crowd whilst bassist Marion Herbain might just be the loveliest one of the lot. Studious and distant for most of the gig, she occasionally breaks into a grin and the warmth is utterly magnetic.

They treat us to a packed set featuring not only the best of the recently released debut album (Stephen, Come On Over, Bad Feeling) but a smattering of old and new tracks which already show serious maturation in terms of melody and structure. They may have intially been lumped in with lo-fi bands such as Beat Happening but that does them a disservice. These tracks aren’t naïve or affected. They fizz with life and enthusiasm. Take Beachy Head for example; how many other pop groups would dare to write a two and a half minute rockabilly call and response ditty about the most notorious suicide spot in the UK? If Doyle and cohorts are the new twee royalty, then long may they reign.