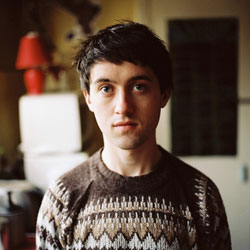 The first Irish act to be signed to independent heavyweight label Domino, Villagers is the solo project of 26-year-old Dubliner Conor O’Brien. His recently released debut album Becoming A Jackal has been garnering good vibes and went straight to Number 1 in his native land. Tonight it was West London’s turn to see what the fuss was about for his largest date in the capital so far.

O’Brien is, in a sense, a traditional singer/songwriter. His songs bring to mind the best in that field – Paul Simon, Neil Young, Conor Oberst – as he marries up poetic, earnest lyrics with strong, memorable melodies. Having written, performed and produced his entire album alone, he’s usually to be found recreating that artistic control on stage. But tonight he’s supported by a full band, serving to enhance and expand on the dramatic quality of his recorded work.

The difficulty when reviewing an artist touring their debut is that it’s tempting to just review the album. Inevitably, the whole record is essentially played on shuffle. However, it is worth noting that the songs are performed faithfully. His voice is as it is, and the instrumentation is superb.

He doesn’t stick to the album’s running order, and follows up the sensitive balladeering of tonight’s opener The Meaning Of This Ritual with a strong one-two of Home, a meaty track which makes more sense with the full-band treatment, and recent single Becoming A Jackal. Actually he makes it a one-two-three by following on with the powerful That Day. It completes an astonishing start to the gig, showcasing how good these tracks are, and how much sonic ground is covered by the album.

Things calm down a little mid-set. He plays album closer To Be Counted Among Men with just an acoustic guitar and the piano, but he still has the impossible-not-to-love ’50s feel-good pop of The Pact (I’ll Be Your Forever) and the excellent, wistful Set The Tigers Free which employs the rest of the band’s vocal harmonies to great effect.

O’Brien acquits himself well as a frontman. He might not really look the part, but that never did labelmate Alex Turner any harm (and frankly there’s a bit of a resemblance). He’s confident and not scared of a bit of chit-chat, although it’s pretty much limited to expressions of excitement and wonder just to be there.

This type of material can easily stray into bland singer-songwriter territory. What saves him, and us, from that hell are some adventurous twists with melody, together with a voice perfectly suited to his work and some impressive wordsmithery. It’s not experimental in that we’ve all heard this kind of music before, but it is experimental in that he’s clearly pushing himself and his own musical boundaries and he knows the benefits of throwing an easy-on-the-ear pop tune in among all of the intensity. It’s an album full of quality, and this type of performance will do him no harm in ensuring that it hangs around for some time.